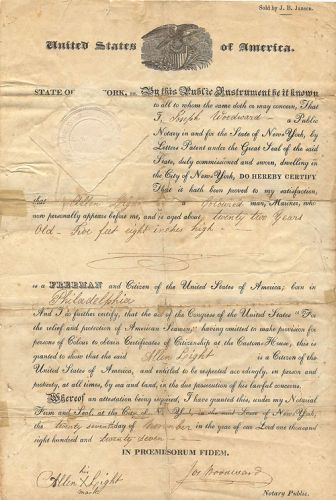 The African American experience in California in the years just prior to the Gold Rush included more than just overland immigrants. Allen B. Light, born in Philadelphia, Pennsylvania, arrived in Santa Barbara, California in 1835 as a crew-member of the American ship Pilgrim. After his arrival in California, Light would bear the titles of mercenary, hunter, Mexican citizen, and even “comisario general” during his time in the West.

Upon arriving in Santa Barbara, Light signed on with a sea-going hunting party led by George Nidever to hunt sea otter off the Californian and Mexican coast. The shortage of otters from over-hunting caused intense competition in the pelt market; otter pelts could be had for as much as $37 each that decade. This competition would escalate to the level of naval skirmishing between Mexico-based parties and with “contrabandistas” – Native Americans (often from present-day Alaska) supported by American brigs. Allen Light became a skirmisher himself when attacked by contrabandistas from the Convoy off Santa Rosa Island. He, Nidever, and two other hunters killed three men with gunfire in order to escape.

By 1839 Light was naturalized as a Mexican citizen. His citizenship was probably connected to the crucial information he provided the California government about illegal hunting ships operating off the California coast.  Light was appointed “Principal Arbiter [or Comisario General] of the National Armada, assigned to the branch of Otter Fishing,” two days after he delivered the information.

Light continued to hunt otters from 1839 to 1842, rejoining George Nidever and Isaac Sparks in Baja California along the way. At one point, in the fall of 1842, they amassed $4,000 worth of pelts and brought them to San Diego, where Light eventually settled. California records show that by 1847 Light had moved in with Richard Freeman, an African American, and the two operated a saloon until Freeman’s death in 1851, at which point Light disappears from the San Diego census records and from history.