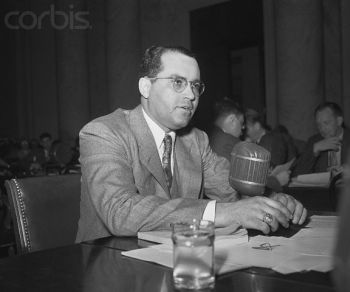 Truman Gibson was an African American businessman, attorney, government advisor, and boxing promoter. Gibson, the son of an insurance executive, was born on January 22, 1912 in Atlanta, Georgia. A few years after he was born, Gibson’s family moved to Columbus, Ohio. Gibson graduated high school in Columbus in 1928 and the University of Chicago four years later.  He then decided to attend law school at University of Chicago, graduating from there in 1935.

Gibson remained in Chicago and began a law practice.  By 1936 he represented the boxer Joe Louis in negotiations with other fighters and fight promoters and because of Louis’s success, soon became wealthy and prominent.  In 1940, Gibson became an assistant to William Hastie, who was then an advisor to President Franklin Roosevelt. Gibson assisted Hastie in investigating issues of discrimination against black soldiers and sailors during the early part of World War II.

When Hastie resigned in 1943, Gibson took his place as the Chief Civilian Adviser to Secretary of War Henry Stimson. While there Gibson helped create an influential war morale film, The Negro Soldier. The film was produced by Frank Capra who by that time was famous for the film It’s a Wonderful Life.  The Negro Soldier was one of the first films to portray African American soldiers as brave, intelligent, and patriotic. Gibson won the Legion of Merit in 1945 for his work in helping to create the film and to ensure that it was shown to thousands of all new Army and Navy recruits of all racial backgrounds.

In 1946 President Harry S. Truman appointed Gibson to the nine-member President’s Advisory Commission on Universal Training which studied the future of military training.  Gibson, the group’s only African American member, played a key role in its decision to file its 1947 report urging desegregation in the military.  Just over a year later, on July 26, 1948, President Truman issued Executive Order 9981 to end segregation in the military partly on the strength of the Commission’s recommendations.

In 1947 Gibson returned to Chicago, and became the manager and promoter for Joe Louis.  After Louis’s career in boxing ended in 1951, Gibson became an official of the International Boxing Club and later served as its first African American president.  The IBS was responsible for promoting title fights and arranging national television coverage during the 1950s.

Gibson left the world of boxing in the mid-1960s and resumed his law practice.   He served on the boards of the Chicago Community Fund and Roosevelt University.  He was also a member of Sigma Pi Phi fraternity. Truman Gibson practiced law until he passed away in Chicago on December 23, 2005.  He was 92 at the time of his death.