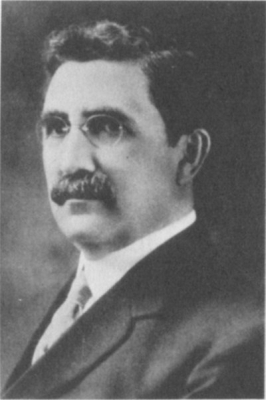 Jesse Moorland was an educator, minister, and a philanthropist, but was most renowned for his extensive work with the Young Men’s Christian Association (YMCA).  Born on September 10, 1863, in Coldwater, Ohio, he was the only child of a local farmer, William Edward Moorland and his wife, Nancy Jane Moorland.  He was raised by his grandparents after his mother passed away and his father decided to leave him in their care.  His grandparents sent him to a local school in Coldwater and then later to the Northwestern Normal School in Ada, Ohio.

In 1886, Moorland married Lucy Corbin and the couple began teaching together in Urbana, Ohio.  They later moved to Washington, D.C. to continue their studies at Howard University.  Moorland studied theology and graduated with his Master’s degree in 1891.  In the same year, Moorland also became an ordained minister in the Congregational Church and was appointed Secretary of the Colored Branch of the YMCA in Washington, D.C.  Two years later, he resigned from the YMCA and moved to Nashville, Tennessee, to become pastor of Howard Chapel.  In 1896, he moved again to become pastor at Mount Zion Congregational Church in Cleveland, Ohio.

Moorland became active with the YMCA again in 1898 when he became an administrator and fundraiser for the Colored Men’s Department.  In his years there, Moorland raised over $2 million dollars to create 29 new YMCA buildings in large cities across the United States.  In 1914, he was appointed Senior Secretary of the Colored Men’s Department where he expanded the YMCA’s college chapters and city associations.  After reaching the mandatory retiring age of 60, Moorland stepped down in 1923.

Moorland’s passion for the development of organizations that served African Americans extended beyond the YMCA.   In 1915 he helped Dr. Carter G. Woodson develop the Association for the Study of Negro Life and History and helped to develop what was then called Negro History Week (now Black History Month).  He also served on Howard University’s Board of Trustees from 1907 until 1936.   During his last four years on the board he served as its chair.  Moorland and National Association for the Advancement of Colored People (NAACP) activist, Arthur B. Spingarn, donated their personal collections of books and manuscripts involving African American History to Howard University.  Named after its creators, the Moorland-Spingarn Research Center evolved over the years from those few hundred donated books into one of the world’s largest African American libraries.

Moorland, a member of Alpha Phi Alpha Fraternity, moved to Brooklyn, New York after his term as a Howard University trustee ended.  In mid- April 1940 he suffered a heart attack and died two weeks later on April 30.  Moorland was preceded in death by his wife.