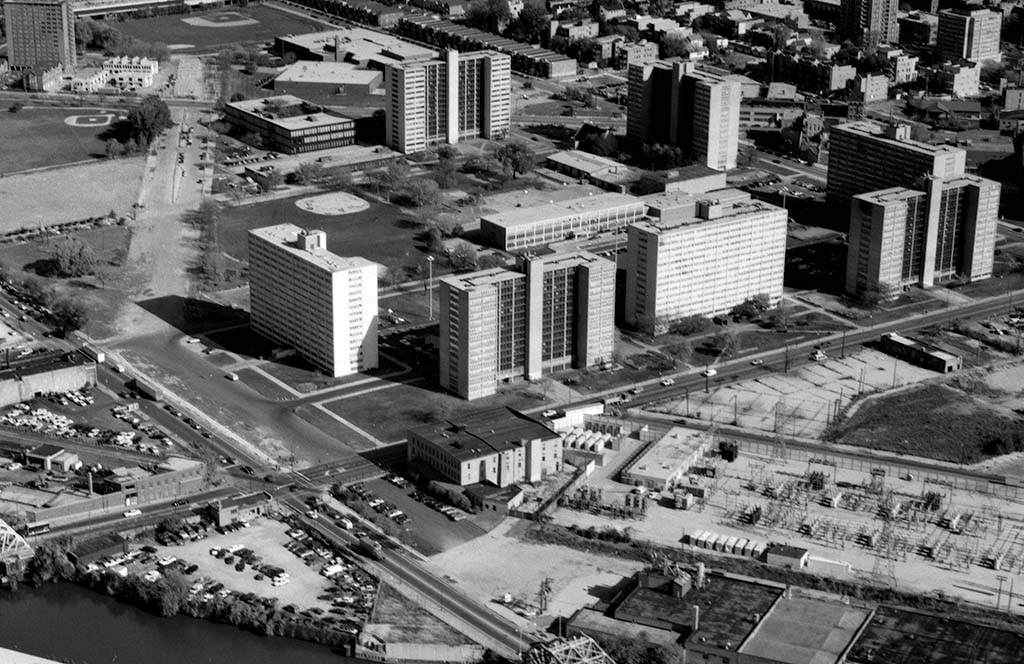 The Cabrini-Green Housing Project was a Chicago (Illinois) Housing Authority (CHA) managed housing project located on the city’s Near North Side neighborhood.  The project was authorized by the Housing Act of 1937 which called for the construction of public housing as part of the effort to eliminate slums in major U.S. cities.  The Frances Cabrini Homes, completed in 1942, was the first major public housing project in Chicago and the first section of what would eventually be called the Cabrini-Green Project.   Its 586 units provided residence for soldiers temporarily stationed in Chicago during World War II and replacement housing for those who had formerly lived in the “Little Hell” neighborhood, the community demolished to allow construction of this project.

Initially the Frances Cabrini Homes had a “quota” of African American residents.   That quota was abandoned as the African American population in Chicago nearly doubled in size between 1940 and 1950 and because white Chicagoans remained adamantly opposed to integrated housing in their neighborhoods.  With the passage of the 1949 Housing Act which approved another wave of slum clearance and new public housing construction, the Cabrini Extension, a high rise of 1,921 units was authorized.   That project was completed in 1958, followed by the nearby William Green Homes, another high rise building (1,099 units) which was opened in 1962.  All three projects became known as Cabrini-Green, and were the first example of high-rise public housing primarily for the African American poor in Chicago.

By 1968 public housing through the city of Chicago was predominantly African American. With high crime and unemployment Cabrini Green, along with other housing projects in the city, came to symbolize the failure of city government in Chicago (and across the nation) to resolve the problems of the concentrated and isolated urban African American poor.

Beginning in the 1980s Chicago political leaders and downtown business interests focused on the redevelopment of Cabrini Green and the surrounding neighborhood.  Ironically because of its close proximity to downtown and the expanding Near North Side, an affluent area along Lake Michigan known locally as the Gold Coast, Chicago officials now viewed Cabrini Green as an area that could be “gentrified.”  They created the North Town Redevelopment Advisory Council which proposed building mixed-income housing to replace Cabrini Green.  The Council also sought to improve public transportation and encourage businesses to locate in the area.  These redevelopment efforts were accelerated in 1994 when the Federal Government allocated $50 million to demolish the public housing high rises throughout Chicago.

Three years later in 1997, Chicago Mayor Richard M. Daley proposed the demolition of 1,324 units in Green Homes and Cabrini Extension.  This plan, however, met resistance from Cabrini Green residents who feared they would be displaced by middle class newcomers as part of the gentrification of the area.  The residents formed the Coalition to Protect Public Housing which demanded that housing in the area remain affordable.  The Coalition, however, was not successful.  By 2009 most of the Cabrini Green units had already fallen to the wrecking ball to make way for the construction of condominiums and town homes in the new North Town Village.