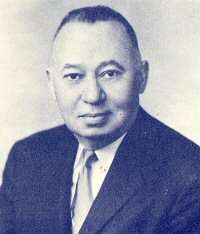 Leading 20th Century black historian Rayford Whittingham Logan was born on January 7, 1897 in Washington, D.C.  to working class parents,  Arthur C. and Martha Whittingham Logan.   Rayford Logan spent his formative years in Washington, D.C.  While in high school, he was taught by Carter G. Woodson.  A bright student, Logan was honored with a scholarship to Williams College where he graduated Phi Beta Kappa in 1917.  Immediately, he joined the U.S. Army in World War I and like many black veterans of that era, was disillusioned as he witnessed the racism perpetrated against black troops by white officers.

At the end of the war Logan remained in France and became immersed in French language and culture.  When W.E.B. DuBois announced the second Pan African Congress would be held in Paris in 1921, Logan stepped forward to coordinate the event.   During his sojourn in France, Logan also became a close friend of Dantès Bellegarde, the Haitian minister to the League of Nations, who was an outspoken opponent of colonialism.  Bellegarde and DuBois, influenced Logan to commit himself to the study of “Negro History.”

Logan returned to the United States in the early 1920s and began his teaching career at Virginia Union University in Richmond. During the next decade Logan spoke out against Jim Crow and assisted local blacks with voter registration.  Eventually, this political activism clashed with the conservative “white” philanthropic board members at the university, and he was forced to resign.  Soon afterwards in 1927, he published “The Haze in Haiti” in The Nation.  His expose described conditions in Haiti under the American occupation.

In 1930 Logan began his Ph.D. studies at Harvard University.  His Harvard dissertation became his first book, The Diplomatic Relations of the United States with Haiti-1776-1891 (1941). However, he still produced articles in scholarly and popular journals as well as newspapers critiquing American racism.  An essay in the Urban League’s Opportunity in 1931 celebrated the heroic slave rebellion of Nat Turner who, as stated by Logan, went to his maker rather than live under the heel of his master.

With his M.A. from Harvard in 1932 and his Ph.D. attained in 1936, Logan began a four decade long scholarly career with the support of both Carter G. Woodson and W.E.B. DuBois.  Logan was intimately involved with Woodson’s Association for the Study of Negro Life and History while continuing to assist DuBois in organizing the Pan African Congress meetings and DuBois’ efforts to bring the plight of Negro Americans to the United Nations.

Logan was hired by Howard University in 1938 and taught there until 1965. He served as an emeritus professor at Howard until 1982.  Logan’s scholarship ranged widely from African to Caribbean to African American history.  Some of his noted works are:  The African Mandates in World Politics (1948);  What the Negro Wants (1944); The Betrayal of the Negro: The Nadir (1965); “The United Nations and the Rights of Minorities” in An Appeal to the World: A Statement on the Denial of Human Rights to Minorities in the Case of Citizens of Negro Descent in the United States of America and an Appeal to the United Nations for Redress (1947).

Rayford W. Logan, a former general president of Alpha Phi Alpha fraternity and historian of Sigma Pi Phi fraternity, died in Washington, D.C. on November 4, 1982 at the age of 85.