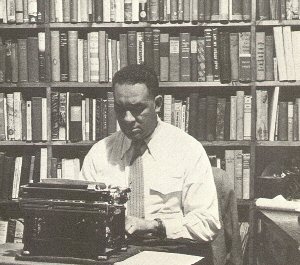 Best-selling author, social critic and influential literary figure Richard Wright was born on September 4, 1908, to Nathan Wright and Ella Wilson, both children of slaves, on a plantation near Roxie, Mississippi. His father was an illiterate sharecropper and his mother was a schoolteacher. Finding farm life unprofitable, the family moved to Memphis, Tennessee, where Wright encountered violence, racism and eventual poverty when his father abandoned the family.

After his mother fell ill in 1915, Wright and his brother were sent to an orphanage, then back to Mississippi to live with their grandparents. Wright felt isolated as a non-religious member of the strict Seventh Day Adventist household. He published his first short story, “The Voodoo of Hell’s Half-Acre,” in 1924 in The Southern Register and held a series of jobs before moving to Chicago in 1927.

As part of the new black urban intelligentsia evolving in northern cities like Chicago and New York, Wright became a critic of the black urban experience and in 1932 joined the Communist Party. He was influenced by University of Chicago sociologists Robert Park and Horace Cayton, Jr., who portrayed black urban spaces as ghettoes mired in poverty. Like most migrants to the north, the life Wright experienced did not live up to his expectations. He began to see conflicts within the Communist philosophy, and eventually abandoned his affiliation. In 1937, he moved to New York City, where he won federal funding as a writer through the Works Progress Administration. Three years later, he published his most popular novel, Native Son (1940).

Native Son became an instant best seller with more than 250,000 copies sold within three weeks of its release.  It was the first book by a black writer to be endorsed by the Book-of-the-Month Club, reaching an even wider audience.  Native Son remains one of the most influential novels of the 20th Century. In Native Son Wright uses the story of Bigger Thomas, a 20-year-old black migrant, to illustrate the poverty, hopelessness and alienation of the black residents in Chicago’s South Side. His was the first of the genre of “ghetto realism” novels that remain popular today.

In addition to his early alignment with Communism, Wright went through several philosophical phases in his literary career, like his existential novel The Outsider (1953), and his anti-colonialist essays in White Man, Listen! (1957). Despite his major and often abrupt political and sociological shifts, he consistently promoted black culture and black protest that he saw emerging in urban life.  His writings, including his acclaimed autobiographical Black Boy (1945), in many ways presaged the Black Power movement of the 1960s and 1970s.

In 1941, Wright married Ellen Poplar after an earlier failed marriage, and they had two daughters.  He moved his family to Paris in 1946, stating his reasons in a poem titled “I Choose Exile” (1950).  In Paris, it seemed to Wright that for the first time in his life he could be both a writer and a black man.