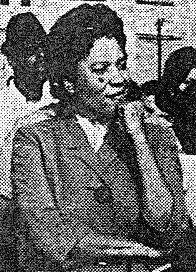 Opal C. Jones was born in Texas sometime in the 1920s and moved to Los Angeles in the early 1950s where she became a social worker at the Avalon-Carver Community Center, established in 1940 to provide multiple resources to low-income residents in south central Los Angeles. In 1965, Jones became executive director of the Neighborhood Adult Participation Project (NAPP), a major anti-poverty program designed to provide training and employment opportunities for adults in poor neighborhoods. NAPP was administered by a Los Angeles community action agency called the Economic and Youth Opportunities Agency of Greater Los Angeles (EYOA).

Through NAPP, Jones voiced a significant critique of the local welfare system which prevented the people served by the programs from playing an active role in their management. Jones also challenged EYOA’s vision of the “War on Poverty” through her various pamphlets. As NAPP became an arena for cultivating leadership in poor neighborhoods, Los Angeles Mayor Samuel Yorty and the EYOA executive director Joe Maldonado saw Jones as a political threat.

The conflict between Jones and the Yorty-EYOA coalition reached its climax in March 1966, leading to Jones’ dismissal. African American leaders in Los Angeles, such as Congressman Augustus F. Hawkins and City Council Member Thomas Bradley, rallied in support of Jones. Eventually Jones, who fought for NAPP to become an “independent, vital, community action program,” succeeded in recovering her position, and even achieved her goal of wresting control of NAPP from EYOA. In 1971 Jones was elected President of the Los Angeles Federation of Settlements and Neighborhood Centers in tribute to her efforts on behalf of NAPP. Jones retired from the agency and returned to Texas.