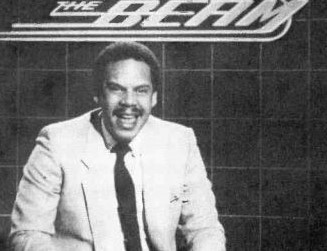 Tom Joyner on the set of Dallas/Fort Worth's KXTX's "The Beam"
Courtesy Radio and Records/AmericanRadioHistory, Fair use image

Tom Joyner is the first African American to become a syndicated radio show host. His “The Tom Joyner Show” is broadcast to over 104 radio stations in the United States. He is also a muscian, author, producer, actor, and television show host. Besides his media involvement, Joyner is best known as a philanthropist, providing fiancial assistance to students at historically black colleges and universities (HBCUs) as well as taking part in other community projects.

Joyner was born in Tuskegee, Alabama on November 23, 1949. His parents Frances and Hercules L. Joyner are graduates of Florida A&M and Tennessee State University, both of which are historically black colleges. Oscar Joyner, his grandfather, graduated in 1902 with a degree in medicine from Meharry Medical School, making him one of fewer than 3,000 black physicians in the United States at the time. Joyner has two sons—Tom, Jr. and Oscar—by his first wife Dora. In 2000 he married Donna Richardson, a celebrity aerobics instructor. They divorced in 2012.

In 1973, Joyner graduated from Tuskegee Instuite with a degree in Sociology, and immediately started his career in radio. His first job in radio was at WLOK in Memphis, Tennessee. He then worked at KWK in St. Louis, Missouri, and KKDA in Dallas, Texas. Beginning in 1978 he worked at a series of Chicago, Illinois radio stations: WJPC, WGCI, WVON, and WBMX.

During the mid-1980s Joyner earned his stripes as the “Fly Jock, the hardest-working man in radio.” He offered a “morning” show at KKDA in Dallas and an “afternoon” show at WGCI in Chicago. Each day he flew by plane between Dallas and Chicago.

In 1994 Joyner signed with ABC radio networks, becoming the first African American to host a syndicated radio show. As a radio show host, Joyner envisioned making a difference in the black community at the national level, first by “getting people laughing,” and then “getting them to listen and think.” He accomplished this by featuring African American comedians and commentators who would report and discuss the latest news and sport while attracting his audience with rhythm and blues music.

In 1998, Joyner became the first African American to be inducted into The National Radio Hall of Fame. In 2004 he received the National Association of Broadcasters Marconi Radio Award and four years later he was inducted into the International Civil Rights Walk of Fame at the Martin Luther King, Jr. National Historic Site in Atlanta, Georgia. In 2013 he was inducted into the Official Rhythm & Blues Hall of Fame in Cleveland, Ohio. After receiving the Best DJ of the Year Award numerous of times, the award was renamed the Tom Joyner Award.

Joyner, in 1998, founded the “Tom Joyner Foundation,” which gives financial assistance to students at HBCUs. The foundation has raised more than $60 million since its founding. Currently his radio program promotes voter registration and encourages healthy living through “Take a Loved One to the Doctor” programs every April and September. Joyner celebrates fathers and mothers once a week by honoring the wish of a deserving father and mother.