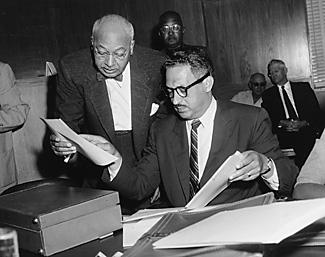 Ulysses Simpson Tate, attorney and civil rights leader, was born on January 26, 1900 in Good Springs, Alabama to James Washington and Mary B. Tate.  The youngest of five children, he received his bachelor’s and master’s degree from Lincoln University in Pennsylvania. He then attended Howard University and graduated in 1947 with his law degree.  While in school, he met and married Jennie E. Tate.

Tate and his family moved to Dallas in 1948 after he became the attorney for the Southwest Region of the National Association for the Advancement of Colored People (NAACP).  In this position, Tate began filing lawsuits and implementing the NAACP strategy for desegregating schools.  In 1949, he filed a suit against the public school district in Fort Smith, Arkansas, alleging that the black high school was old and unsafe.  He also noted the omission of certain subjects at the African American school such as chemistry, physics, and the romance languages—courses that were available at the white high school.

This successful lawsuit served as a model for subsequent legal challenges in Arkansas.  Winning cases to improve conditions in high schools throughout the Southwest region, Tate then employed the NAACP strategy to desegregate college- and university-level Jim Crow practices.  In 1950, he was one of the attorneys that filed a case against Louisiana State University Law School, which refused to admit Roy S. Wilson because of his race.  Tate encouraged more blacks to enroll in college and worked on opening more schools so that, by September of 1954, there were 11 Texas junior colleges opened to blacks.  He also filed against several institutions, including the University of North Texas College, Lamar College, Midwestern University, and the University of Texas, El Paso. Tate won dozens of lawsuits that desegregated schools, parks, hospitals, and other public facilities across the Southwest.

Tate worked on other cases as well, including a 1951 challenge to voting discrimination in Harrison County, Texas, and another case against the Missouri Pacific Railroad on behalf of the Michigan delegation to the National Beauty Culturist League convention in Houston.  This delegation bought tickets, boarded the train in Detroit, and rode south without any incident until they reached Texas where they were asked to move to the Jim Crow car, and were threatened when they didn’t move quickly.  Tate also filed a successful lawsuit against the United Steelworkers of America which helped to end segregation in the steel industry in Texas.

In his career, Tate worked with many outstanding lawyers, including Thurgood Marshall, Robert L. Carter, and William J. Durham.  He also offered his services to community and NAACP leaders, including A. Maceo Smith, Lu Lu B. White, and Juanita Craft.  Tate moved to Oklahoma in 1963.

On December 12, 1968, Ulysses Simpson Tate died of a stroke in Wewoka, Seminole County, Oklahoma at the age of 68.  He was fondly remembered for all the work he accomplished for the NAACP; Roy Wilkins remarked that “Mr. Tate rendered invaluable service not only to the NAACP but to the entire southwest region.”

Amilcar Shabazz, Advancing Democracy: African Americans and the
Struggle for Access and
Equity in Higher Education in Texas