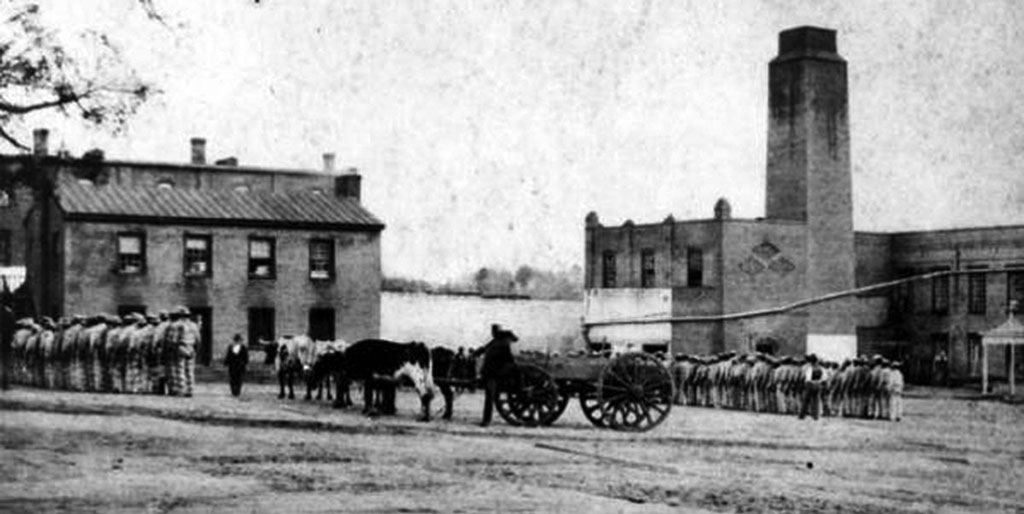 The Texas State Penitentiary at Huntsville, the hometown of Sam Houston, was established in 1849. It is also referred to as the “Walls Unit” for the 15-foot masonry wall that surrounds the prison yard. Currently, it has the capacity to house 1,705 male inmates. During the Civil War, the Wall Unit housed Union prisoners of war.

In 1867 the state entered into lease arrangements with private individuals who hired prisoners to work on private farms, on railroads, and in mines and quarries. Those prisoners not leased out remained in the prison working in a variety of shops producing goods for sale on the open market. The practice of leasing prisoners was driven by the need for prisons to be self-sufficient and to not be a burden to the taxpayer. To that end, a loophole in the Thirteenth Amendment allowed the state to legally force prisoners to work without compensation. Section One of the Thirteenth Amendment states “Neither slavery nor involuntary servitude, except as a punishment for crime whereof the party shall have been duly convicted, shall exist within the United States, or any place subject to their jurisdiction.”

Inmates were originally seen as slaves of the state. In the 1871 case, Ruffin v. Commonwealth, the Virginia Supreme Court stated that “For the time being, during his term of service in the penitentiary, [the prisoner] is in a state of penal servitude to the State. He has, as a consequence of his crime, not only forfeited his liberty, but all his personal rights except those which the law in its humanity accords to him. He is for the time being the slave of the State.”

From 1819 until 1923, hanging was the main method used for most executions in Texas. Originally, they were administered by the county where the trial took place. However, in 1923 the Texas legislature changed the law governing executions designating that all executions be carried out at the Texas State Penitentiary at Huntsville. They also changed the method of execution from hanging to the electric chair. Since then Texas has historically had the highest rate of executions of prisoners in the United States, and still holds that record. Of the 29 states that still retain the death penalty, Texas had the highest number of executions in 2018 with a total of 13. The State of Texas adopted lethal injection as means of execution in 1977.