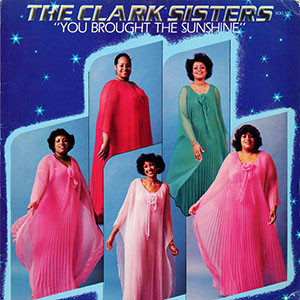 You Brought the Sunshine (Sound of Gospel, 1981) by The Clark Sisters
Fair use image

The Clark Sisters, an African American gospel ensemble comprising five daughters, was established in 1966 is the highest selling female gospel group in United States history. The singers are Jackie, born in 1948 in Selma, Alabama, from the first marriage of Leo H. Cullum, Sr. and Mattie Moss Clark, pianist, composer, and choral director from Selma. The other daughters are Denise, born in 1953; Elbernita in 1954; Dorinda in 1957; and Karen in 1960. They are from the second marriage of Rev. Elbert Clark, an evangelist, and Mattie Moss Clark. The last four of the Clark Sisters were born and reared in Detroit, Michigan. However, all five daughters were taught piano, sight-singing, and choral arranging sing by their mother. They began singing in the Berea Church of God on Detroit’s Westside, pasted by Elbert Clark. All of the sisters graduated from the city’s Mumford High School. They have one brother, Leo H. Cullum, Jr.

In 1973, the Clark Sisters recorded their first album, Jesus Has A Lot to Give. The following year (1974), the ensemble released the album He Gave Me Nothing to Lose, which hit the top 20 of the Billboard Spiritual Albums chart. In 1983, they released the single, “You Brought the Sunshine,” from the album You Brought the Sunshine. It peaked at #16 on the Billboard Black Singles chart and was a crossover hit, selling more than 200,000 records, beyond the normal Gospel Music market.

In 1994 the sisters lost their mother and principal mentor, Mattie Juliet Moss Clark, the founder of the Clark Sisters, on September 22 in Southfield, Michigan. She was 69.

Pioneers of contemporary gospel music, the Clark Sisters, were honored in 2020 with the James Cleveland Lifetime Achievement Award at the 35th Annual Stellar Awards recognizing their achievements in the gospel music industry.

In 2021, the Clark Sisters hit the top of the Billboard and Media base charts with their single, “His Love,” featuring hip hop icon Snoop Dogg. The single is from their most recent album, The Return, and is their most successful single and their third single to hit #1 over their five-decade career. The album won the 2021 NAACP Image Award for “Outstanding Gospel/Christian Album.” Over these decades the Clark Sisters have had powerful influences over both gospel and secular artists ranging from Anita Baker and Bobby Brown to Mary J. Blige and CeCe Winans.