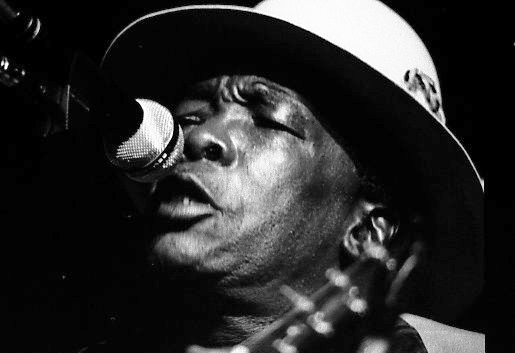 Singer and guitarist John Lee Hooker was best known for his unique style of Delta Blues, known as “talking blues.” He had a long and successful career, which was revitalized as he turned 80 with two Grammy Awards. His influence can be seen in today’s generation of rock musicians.

Born August 22, 1917 near Clarksdale, Mississippi to William Hooker and Minnie Ramsey, John Lee was the youngest son of a family of sharecroppers and began his musical career at an early age singing gospel at his Baptist church. At thirteen, under the guidance of his stepfather William Moore, Hooker learned how to play the guitar. Moore, a talented blues guitarist who never recorded, was a friend of such bluesmen as Blind Lemon Jefferson and Charley Patton, and effected considerable influence on Hooker’s musical development.

Determined to make his mark as a blues performer, Hooker moved to Memphis, Tennessee as a teenager and then to Cincinnati, Ohio, where he sang and played guitar at house parties and various nightclubs. In 1943, Hooker moved to Detroit, Michigan where he worked as a janitor at the Ford Rouge factory while continuing to perform at nightclubs in the evenings. After being “discovered” by a record store owner, Hooker made his first recording “Boogie Chillen’” with Modern Records in 1948. “Boogie Chillen’” became his breakthrough hit, selling over one million copies. Hooker’s 1949 recording “Crawling King Snake” became his second hit, and was followed up with another hit track “I’m in the Mood” two years later.

During the 1950s, Hooker produced dozens of songs, recording with a band or working alone. Hooker switched from label to label, recording with various record companies and employing pseudonyms like Texas Slim, Delta John, and Johnny Lee to avoid contractual problems. He finally signed with Vee-Jay Records in 1955 and released “Dimples” in 1956. It became his first British hit a few years later. In 1961, Hooker recorded “Boom Boom,” a song that became a sensation among American youth – black and white – and helped bring a new audience to urban blues. The Animals’ 1964 cover of “Boom Boom” further established Hooker’s popularity, as his music crossed over to rock audiences in both Europe and the United States.

By the 1970s, Hooker had moved to California, continuing to record and release songs with various artists and record labels, only to receive dwindling returns. Disenchanted, he stayed out of the recording business for more than a decade. He revived his career in 1989 with The Healer, a critically-acclaimed album that featured guest appearances from Carlos Santana and Bonnie Raitt, among others.

The album’s commercial success led to dozens of CD collections of past work and popular performances with artists such as Van Morrison, B.B. King, Eric Clapton and the Rolling Stones. In 1991, Hooker was inducted into the Rock and Roll Hall of Fame, and in 2000 was honored with a Grammy Lifetime Achievement Award.