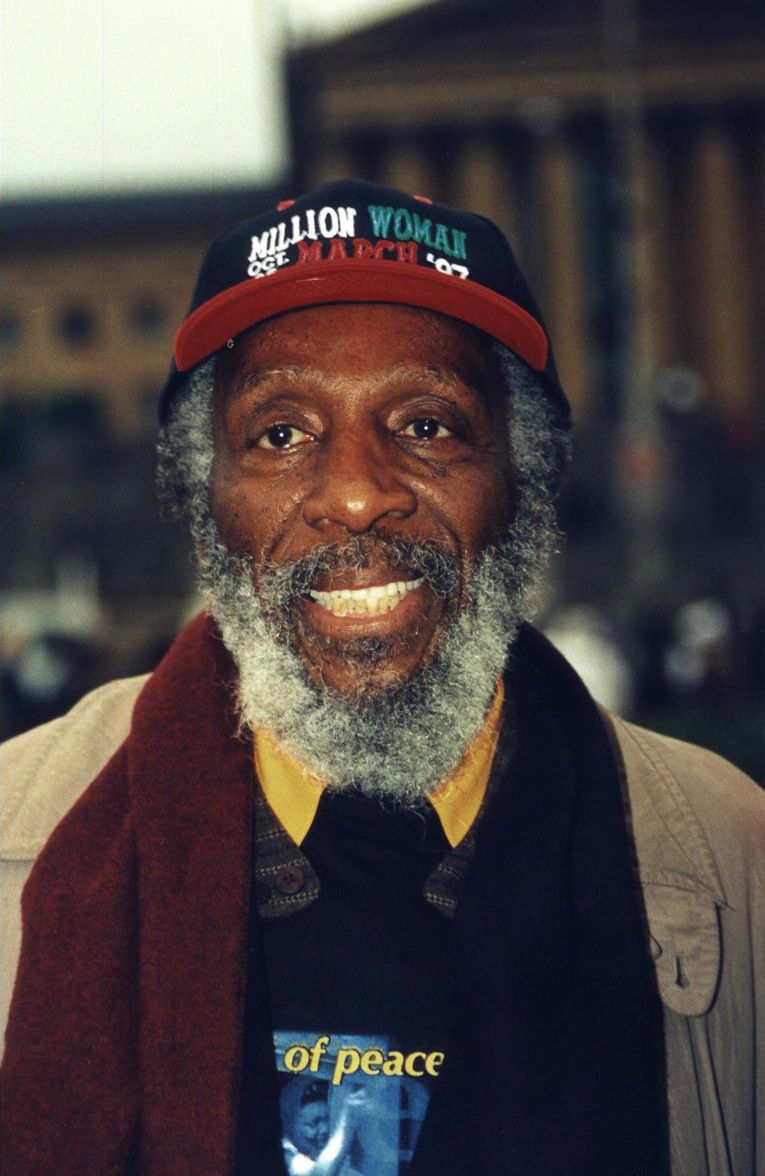 Dick Gregory, comedian, actor, and civil rights activist, was born Richard Claxton Gregory in 1932 in St. Louis, Missouri.  Gregory’s father left the family when Gregory was a child forcing his mother, Lucille, a maid, to raise him and his five siblings.  During his high school years Gregory joined the track team at Sumner High School and broke several school records.  He consequently won a track scholarship to Southern Illinois University in 1951.  Around 1953, Gregory’s mother died and he left college.  He was drafted into the Army, where he performed as a comedian and won his first talent show.

Three years after leaving the Army, Gregory made his name as a comedian in Chicago nightclubs while living with his brother Presley.  In 1959, he married Lillian Smith and together they had ten children.

In 1960, Gregory accepted Hugh Hefner’s invitation to perform for a group of white Southerners at Chicago’s Playboy Lounge.  The gig turned into a six-week commitment and he received positive reviews in national publications such as Time magazine.  The job helped Gregory become one of the first black comedians to successfully perform in major all-white nightclubs. Through programs such as the Jack Paar Show, he became one of the first black comedians to break through to national white television audiences.  His humor often addressed the contemporary issues of segregation and racism which were being brought to the national spotlight by the civil rights movement.  During this time Gregory increasingly devoted his humor to the civil rights cause.  Between 1961 and 1964 he released In Living Black and White, Dick Gregory Talks Turkey, The Two Sides of Dick Gregory, and Running for President.

In the early 1960s, Gregory befriended Civil Rights activist Medgar Evers and went to Mississippi to march for black voting rights. After Evers’ 1963 murder, Gregory gave up performing full-time to become more involved in the Civil Rights movement.  He marched with Dr. Martin Luther King Jr. and other civil rights leaders.  He flew to Moscow, USSR to protest Soviet treatment of black soldiers in 1964.  In 1967, Gregory ran for mayor in Chicago, but lost to Richard J. Daley.  He then organized a failed bid for the presidency in 1968.

In the early 1970s, Gregory expanded his focus to world hunger and healthy nutrition.  He moved his family to Plymouth, Massachusetts where he became a vegetarian and started running marathons.  Gregory also fasted to draw attention to national and international causes such as racial injustice, the war in Vietnam, world hunger, the treatment of Native Americans, and apartheid.

Over the next three decades, Gregory became a popular speaker on civil and human rights at universities and colleges.  He hosted his own Washington D.C. radio show and wrote several books, including Nigger, Up From Nigger, No More Lies, and Callus on My Soul. He also developed and sold a diet drink.  Late in life, he still performed comedy at St. Louis and New York clubs.  His latest work is Dick Gregory 21st Century “State of the Union.”