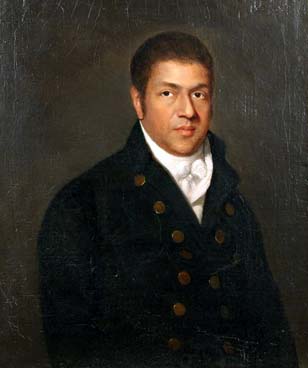 Paul Cuffe is best known for his work in assisting free blacks who wanted to emigrate to Sierra Leone.  Cuffe was born free on Cuttyhunk Island, Massachusetts (near New Bedford) sometime around 1759. The exact date of his birth is unknown. He was the youngest of ten children. His father, Kofi (also known as Cuffe Slocum), was from the Ashanti Empire in West Africa. Kofi was captured, enslaved and brought to New England at the age of 10. Paul’s mother, Ruth Moses, was Native American. Kofi, a skilled tradesman who was able to earn his freedom, died when Paul Cuffe was a teenager. The younger Cuffe refused to use the name Slocum, which his father had been given by his owner, and instead took his father’s first name.

Cuffe became politically active in his early 20s.  In 1780, against the backdrop of the American Revolution, Cuffe led a group of free blacks to petition the Massachusetts government either to give African Americans and Native Americans voting rights or cease taxing them. Although the petition failed to sway the Massachusetts General Court (legislature) the campaign helped pave the way for creation of a new Constitution in 1783 which granted equality to all Massachusetts citizens.

Cuffe, who married at the age of 25, was a devout and evangelical Quaker who early on developed a reputation as a philanthropist. He donated the funds to create a school in his hometown of Westport, Massachusetts, and was supportive of other educational endeavors.   A staunch opponent of slavery and the slave trade, he united with other emancipated African Americans in the Northern states in their abolitionist campaigns, using his Quaker connections with sympathetic co-religionists to support his efforts.

Cuffe, first a whaling ship captain, eventually became a ship owner, operating a number of vessels which sailed between ports along the coast of Massachusetts.  By 1811 he was reputedly the wealthiest African American in the United States and the largest employer of free African Americans.  Despite his commercial success, Cuffe became increasingly disillusioned with the racial status of African Americans, and believed the creation of an independent African nation led by returnees from the United States offered the best prospects for free blacks and for African modernization.

Inspired by British abolitionists who had established Sierra Leone, Cuffe began to recruit blacks to emigrate to the fledgling colony.  On January 2, 1811, he launched his first expedition to Sierra Leone, sailing with an all-African American crew to Freetown.  While there Cuffe helped to establish “The Friendly Society of Sierra Leone,” a trading organization run by African Americans who had returned to West Africa. Cuffe and others hoped the success of this enterprise would generate a mass emigration of free blacks to West Africa who, once there, would evangelize the Africans, establish business enterprises, and work to abolish slavery.

In 1815 Cuffe led 38 African American colonists to Sierra Leone.  The colonists established new homes and integrated into the small community of former English residents and refugees from Nova Scotia.  Cuffe hoped to organize larger groups of black emigrants.  Cuffe’s efforts, however, were soon eclipsed by the larger and much better funded American Colonization Society, founded in 1816, which promoted a similar scheme that eventually created the colony of Liberia.  As white and black Americans debated the merits of the ACS’s mass emigration program, Cuffe’s earlier efforts were soon eclipsed.  Paul Cuffe died on September 9, 1817.