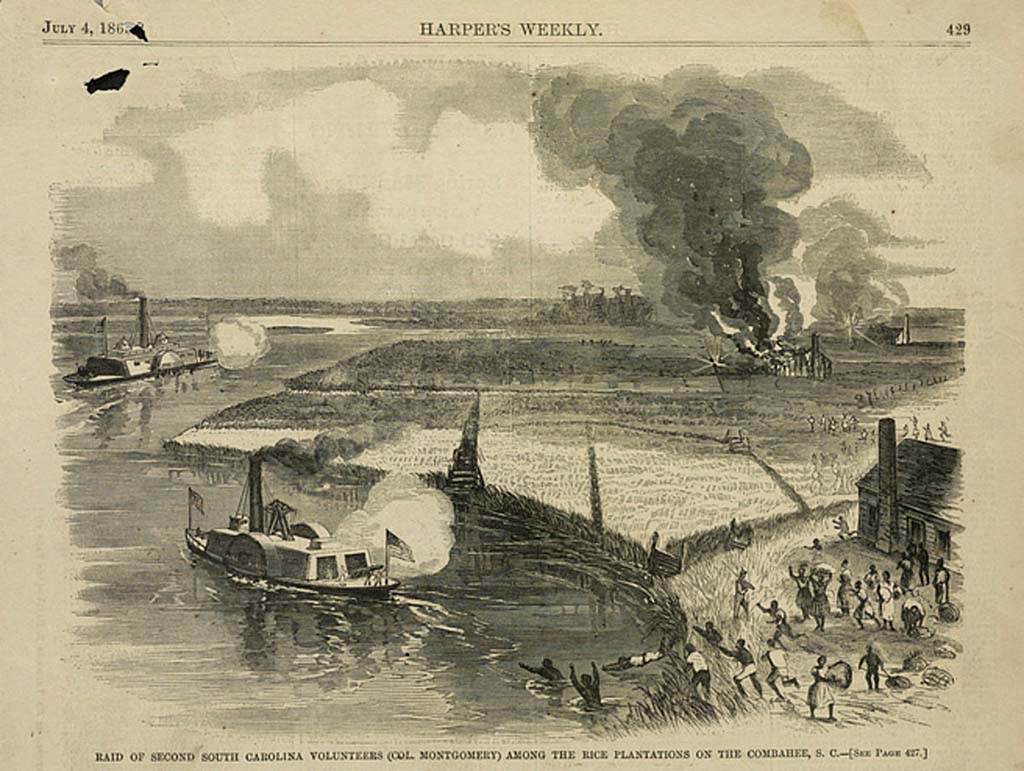 On June 2, 1863, Harriet Tubman led 150 black Union soldiers, who were part of the U.S. 2nd South Carolina Volunteers, in the Combahee River Raid and liberated more than 700 enslaved people. Tubman, often referred to as “the Moses of her people,” was a former slave who had fled to freedom in 1849. Throughout the 1850s, she returned to her native Maryland to bring other enslaved people north into freedom, first to Pennsylvania and then eventually to Canada.

Tubman had worked mainly through the Underground Railroad in the 1850s. By 1862, however, she left her home in Auburn, New York to work in the Union-occupied Hilton Head area of South Carolina as a nurse and spy during the Civil War.  In 1863, Colonel James Montgomery asked her to lead a secret military mission against Confederates in South Carolina.  With the support of Union gunboats, she and members of the 2nd South Carolina Volunteers traveled into Confederate territory to free enslaved people and destroy wealthy rice plantations. Some of the formerly enslaved men were recruited into the army.

On the night of June 1, 1863, three federal gunboats set sail from Beaufort, South Carolina traveling up the Combahee River. Tubman had gained vital information about the location of rebel torpedoes planted along the river from slaves who were willing to trade information for freedom. Because of this information, Tubman was able to steer the Union ships away from any danger. She led the ships to specific spots along the shore where fugitive slaves were hiding and waiting to be rescued. At first, many of the slaves were frightened by the Union soldiers’ presence, but Tubman was able to convince them to come aboard.

As “Lincoln’s gun-boats” traveled up river, more slaves were rescued and eventually 750 boarded the vessels.   The boats, however, also had a specific military mission.  They carried Union troops who came on shore and succeeded in destroying several influential South Carolina estates owned by leading secessionists, including the plantations of the Heyward, Middleton, and Lowndes families. Many of the Union soldiers who took part in the raid were former slaves who saw the burning and pillaging of these estates as an opportunity to enact revenge on the master class.

By the time Confederate forces learned of the raid, much of the damage had been done.  Hundreds of slaves, including women and children, were able to escape.  A company of Confederate troops was sent to challenge the raiders, but they were not successful. They managed to stop only one slave from escaping to the gunboats by killing her.  Confederate artillery proved almost as ineffective since none of the rounds they fired hit any of the gunboats.

Harriett Tubman was the only woman known to have led a military operation during the American Civil War.  Thanks in great part to the intelligence she provided, the Union boats and over 700 slaves escaped unharmed , including 100 men who joined the Union Army.  The Combahee River Raid was a major military and psychological blow to the Confederate cause.