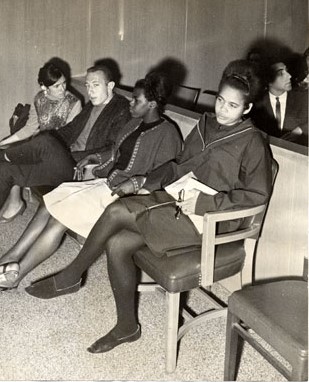 San Francisco civil rights activist Tracy Sims, now Tamam Tracy Moncur, was born in 1945 in Oakland, California. Sims moved to San Francisco with her mother and brothers when she was in high school. She later married jazz musician and composer Grachan Moncur III, and the two have six adult children and seven grandchildren.

Influenced by her politically active mother, Charlene, Sims continued to attend Berkeley High School during the period when the neighboring University of California, Berkeley campus was increasingly politicized.  Sims as a Berkeley High student was influenced by the growing campus activism but she also cited her mother, Malcolm X, and Martin Luther King Jr. as her major influences.  She joined the communist-affiliated campus W.E.B. DuBois club while still in high school. This club partnered with the San Francisco NAACP chapter and other Berkeley students to form the Ad Hoc Committee to End Discrimination in 1963. The Committee organized demonstrations which called attention to discriminatory employment practices.  Sims’s first experience picketing was at the Mel’s Drive-In protest in November 1963.  She later participated in “shop-ins” at the Lucky Grocery Store on Telegraph Avenue in Berkeley.

While still in high school, Sims moved to the forefront of the San Francisco student movement with the marches and sit-in protest at the Sheraton-Palace Hotel in March 1964. Chosen because of her energy and public speaking ability, Sims became, at age 18, one of the spokespersons for the largest civil rights protest in San Francisco history.  She led pickets against the exclusion of blacks and other workers of color from the staff of the Sheraton-Palace.

Sims was one of 167 picketers arrested on March 6 when approximately 1,500 protestors occupied the lobby of the city’s largest hotel.  Despite her arrest Sims led the negotiations — which included hotel management and were brokered by San Francisco mayor John F. Shelly — which resulted in the Sheraton Palace and 33 other major hotels in the Hotel Owners Association abandoning their discriminatory practices. Later in the year Sims participated in Auto Row demonstrations which focused attention on the absence of black employment among the city’s auto dealers and their reluctance to sell cars to African Americans.   By the end of 1964, however, Sims moved to New York to join her mother and brothers, who had moved there a year earlier.

Sims never again participated in civil rights protests.  After moving to Harlem, she began to pursue a career playing jazz piano, when she met and married Moncur. The two moved to Newark, New Jersey where Sims (now going by the name Tamam Tracy Moncur) attended Essex County College and Rutgers University, Newark to earn a Bachelor’s degree in Education in 1968.  She then began a 25 year career as a teacher in the Newark public school system.  During this period she earned two graduate degrees in Education from Montclair State University. She received several awards for her service as an educator.

In 2008 Moncur published the book Diary of an Inner City Teacher, which described her experiences and reflections on American public schools.  She retired from teaching in 2010 and is currently the CEO of celebritytradingplace.com, a small web business which sells her book as well as her husband’s music and writing productions.  She is also CEO of 72 Hours, a theatrical production company, and director of public relations for the House of Love Soup Kitchen located in Newark.