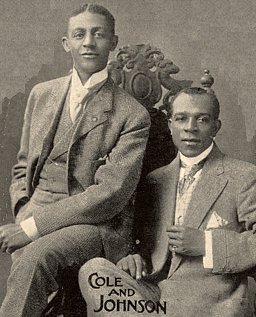 Entertainer Robert Allen “Bob” Cole, Jr. was born on July 1, 1868 in Athens, Georgia to his parents Robert Allen Cole, Sr. and Isabella Thomas Weldon. The Coles were well known in the Athens community, which boasted a robust African American community at the time.  Being from a large, musical family Bob Cole found himself learning to play the drums, banjo, guitar, piano and cello.

Cole left Athens when he was fifteen, moving in with his mother’s relatives from Florida.  Throughout his years as a teenager and young adult, Cole had many roles in entertainment.  Much of these included playing in clubs throughout the East Coast, often involving singing, playing instruments and performing comedy.

Later, Cole would become a formidable act in writing music and performing in a show titled “Black America”.  By 1895, he was a stage manager and writer for a touring act called “The Creole Show” which featured many of his own composed songs.  After his white managers denied Cole greater compensation, he left his touring group bringing with him scripts and written songs.  However, his former managers blacklisted him preventing much interest in him from any subsequent managers.  This caused Cole to write and publish his songs under the pseudonym Will Handy.

Cole, and some of the dissidents from his original touring group would go on to form one of his better known works, “A Trip to Coontown”.  Written by Cole and his partner Billy Johnson, “A Trip to Coontown” debuted on September 27, 1897 in South Amboy, New Jersey and is considered to be the first black musical comedy.  Although the script from “A Trip to Coontown” no longer exists, we know that its existence was a major point of contention for many competing shows.  Another theater troupe, Black Patti’s Troubadours, attempted to book shows in the same cities as Cole’s group.  They would compete by booking in the same cities two weeks before, to try to relieve interest for Cole’s show. Eventually, Cole would end his partnership with Billy Johnson and start a new partnership with two brothers, also named Johnson.

Cole’s partnership with James Weldon and J. Rosamond Johnson would last until his retirement in 1911. Eventually, James Weldon would leave the partnership to join the U.S. diplomatic corps. However, their partnership would lead to a contract with Jos. W. Stern and Sons for publication of their music.  Johnson and Cole would become one of the most famous musical duos in America as some of their hits included “Under the Bamboo Tree”, as well as a series of songs called “The Evolution of Ragtime”.  This newfound fame was what made Cole one of the best-known entertainers of the early 20th century.

In April 1911, Cole collapsed while performing on stage with Johnson.  Many newspapers reported on his condition for months and he was subject to great speculation.  While recuperating, he went to the Catskills in New York to be with his family. However, he committed suicide on August 2, 1911.  He was 43.