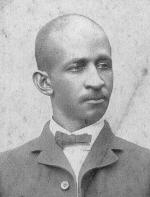 Caesar Carpenter “C.C.” Antoine is best known as a leading African American politician in Louisiana during Reconstruction (1863-1877). Antoine was born in New Orleans to a Black father who fought the British as an American soldier at the Battle of New Orleans (1815), and to a West Indian mother. His father’s mother was from Africa and the daughter of a captured African chief. Her reputed self-purchase from slavery and accumulation of a minor fortune allowed C.C. Antoine and his father to live out their lives as free blacks.  Prior to entering politics, Antoine ran a successful grocery business in New Orleans.

In 1862, one year after the Civil War began, New Orleans was captured and occupied by Union troops, Antoine joined the Union Army and quickly rose to the rank of Captain.  From 1862 to 1865 Captain Antoine was attached to one of the nation’s first all-black regiments, the Louisiana Native Guards. As Captain, Antoine recruited former bondsmen for service and developed Company I of the Seventh Native Guard primarily stationed at Brashear (now Morgan City) about 85 miles southwest of New Orleans.

At the end of the Civil War, Antoine moved to Shreveport, Louisiana, opened a family grocery store, bought land and became a farmer.  He soon entered politics and held his first office as a delegate to Louisiana’s Constitutional Convention in 1868.  That convention set the parameters of Louisiana’s Reconstruction-era state government. With black voting rights established under the protection of federal troops, Antoine served Louisiana as State Senator between 1868 and 1872 and Lieutenant Governor from 1872 to 1877.  In 1876 he was briefly Acting Governor.  Antoine’s tenure in office ended soon after the Compromise of 1877 which withdrew federal troops from Louisiana, allowing the Democrats to return to power.  Although Antoine continued to be active in Republican Party politics, he never again held public office.  In 1921, C.C. Antoine died of natural causes at his home in Shreveport, Louisiana.