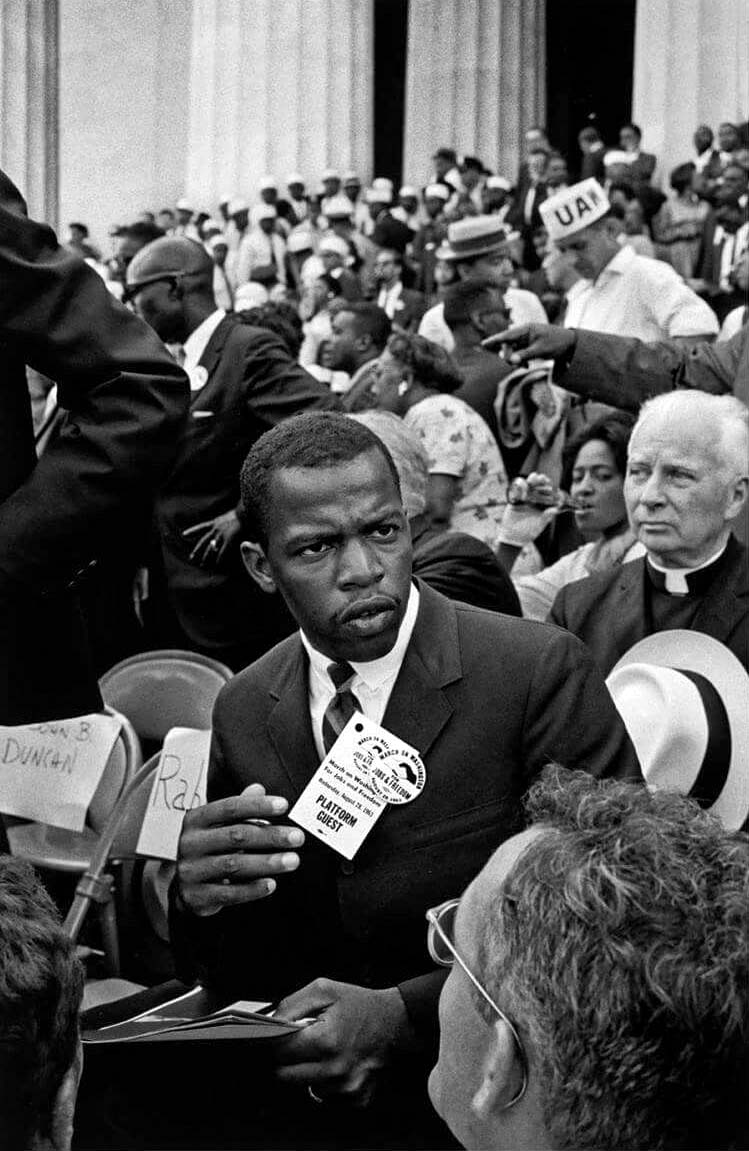 Rep. John Lewis was a U.S. Congressman and civil rights icon, who chaired the Student Nonviolent Coordinating Committee from 1963 to 1966. He was a Democrat who represented Georgia’s 5th Congressional District from 1987 until his death in 2020.

While attending American Baptist Seminary, Lewis emerged as a civil rights leader. He participated in the Nashville sit-in movement in 1960 and the Freedom Rides the following year.  In 1963, he became the chairman of the Student Nonviolent Coordinating Committee (SNCC) and helped organize the March on Washington, where he was one of the keynote speakers.  In 1964, he helped to plan SNCC’s activities during Freedom Summer. Lewis became nationally known after Alabama State Troopers attacked him and 500 other protesters attempting to cross the Edmund Pettus Bridge during the 1965 Selma to Montgomery Voting Rights March. Lewis suffered a fractured skull from the beating.

In 1966, Lewis left SNCC as it embraced Black Power and started working with community organizations in Atlanta, Georgia.  Later that year, he was named director of community affairs for the National Consumer Co-op Bank in Atlanta.

Lewis first ran for office in 1977. He attempted to win the open congressional seat that was created when President Jimmy Carter appointed Congressman Andrew Young as Ambassador to the United Nations.  Lewis lost the special election to the future U.S. Senator Wyche Fowle, an Atlanta councilman.  Four years later, Lewis was elected to the Atlanta City Council, where he gained crucial experience and exposure for his next congressional race.  In 1986, Fowler resigned his seat to run for the U.S. Senate.  Lewis ran again, and this time he won the Democratic primary and then the general election.  John Lewis was only the second African American since Reconstruction to represent the state of Georgia in Congress.

Lewis rose in power within the Democratic party.  Since 1991 he had been senior chief deputy whip.  He was a member of the Congressional Black Caucus.  Lewis was a strong and vocal opponent of the Iraq War.  He was also the first member of the House to call for the impeachment of President George W. Bush for authorizing the National Security Agency to conduct wiretaps without a warrant.  Lewis was instrumental in creating in the National Museum of African American History and Culture in Washington, D.C.  He first introduced legislation to create a national museum in 1988. Although it failed to pass, he continued to introduce legislation until it passed in 2003. Lewis was a strong pro-choice supporter and had called for federal funding of stem cell research.

John Lewis was often referred to as the “conscience of the U.S. Congress.” In 1998, he published his autobiography Walking with the Wind: A Memoir of the Movement. He also published a graphic novel trilogy called March. He received the Presidential Medal of Freedom from President Barack Obama in 2011. He was a member of Phi Beta Sigma and Sigma Pi Phi fraternities. In December 2019, Lewis revealed that he had been diagnosed with pancreatic cancer.