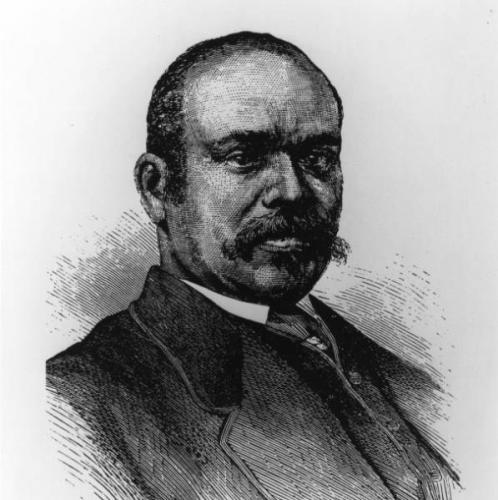 Oscar James Dunn was Louisiana’s first black lieutenant governor, serving from 1868 to 1871, and one of three who held that post in the state during the Reconstruction era. Dunn was born enslaved in New Orleans in 1826 to Maria Dunn who was also enslaved and James Dunn who was born enslaved in Petersburg, Virginia but who was later emancipated by his owner, James H. Caldwell who had earlier brought him to New Orleans.  After his emancipation, James Dunn married Maria and the couple had two children.  Despite the father’s status as a free person, Louisiana law mandated that the children follow the status of the mother meaning they remained enslaved.

By 1832, however, James Dunn had earned enough money as a carpenter to buy freedom for his wife and children including Oscar who was seven at the time.  James Dunn continued to work as a carpenter but Maria Dunn ran a boarding house for actors who performed in the St. Charles Theater founded by Caldwell.  The family was prosperous enough for young Dunn to have private lessons which allowed him to become an accomplished musician and later a violin instructor.  He also learned the art of public speaking from actors who stayed at his mother’s lodging establishment. Nonetheless Dunn also apprenticed as a plasterer and house painter.

Dunn’s career as a public official unofficially began in December 1864. At mass meetings in New Orleans, he emerged as one of a handful of powerful radical voices demanding complete black legal equality and male suffrage in Louisiana’s post-Confederate state government.  Dunn joined the Republican Party where he pushed for tax-payer-funded education for all black children, and urged black land ownership.  He opposed President Andrew Johnson’s pardoning former Confederate rebels without enforcement of a loyalty oath; returning their lands (often seized by former slaves during the Union occupation of Louisiana in the Civil War); and forcing African Americans back to their former slave owners’ plantations as sharecroppers and “convict” labor.

After the Civil War Dunn opened and employment agency and he was later appointed Secretary of the Advisory Committee of the Freedman’s Savings and Trust Company of New Orleans, a bank established by the Freedman’s Bureau.  In 1866 he organized the People’s Bakery, a cooperative owned and operated by the Louisiana Association of Workingmen.

Dunn was elected to his first political office in 1867, the New Orleans City Council. There he worked for a city charter amendment that called for “all children between the ages of 6 and 18 to be eligible to attend public schools.”  Because of his activism, Dunn became known in national Republican circles and on April 2, 1869, he met with President Ulysses S. Grant in the White House.

In 1868, Dunn ran for Lt. Governor, partnering with white Republican Henry Clay Warmoth.  When the Republican ticket of Warmoth and Dunn won the statewide contest by 64,941 to 38,046, Dunn was inaugurated Lt. Governor on June 13, 1868.  As Lt. Governor, he was also President pro tempore of the Louisiana State Senate, becoming one of only seven black men in that body and the only former enslaved person to serve there.

Internal Republican politics caused Dunn to organize a challenge to Governor Warmouth at the statewide Republican Convention in 1870.  He unsuccessfully challenged Warmoth for the governorship and later led a radical faction of Lincoln Republicans who attempted to have Warmoth impeached for corruption.  Warmoth found allies among the former slaveholders and temporarily became a Democrat to frustrate Dunn and other Louisiana Republicans who opposed him.  Warmoth was reelected governor in 1870 but with Pickney Benton Stewart Pinchback, another African American, as his running mate.  When Warmoth was finally impeached in December 1872 and removed from office, Lt. Governor Pinchback briefly served as the nation’s first black governor.  Dunn however never saw that day.  On November 22, 1871, Oscar James Dunn died at the age of 45 of congestion of the brain although some claim he was poisoned by his political enemies.  He was survived by his widow, Ellen Boyd Marchand and the couple’s three adopted children, Fannie, Charles, and Emma.