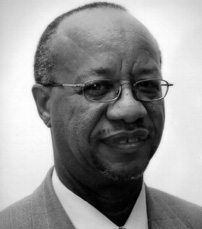 Charles Sherrod was a key civil rights leader in the Student Nonviolent Coordinating Committee (SNCC) whose leadership led to the Albany Movement in southwest Georgia. Born in extreme poverty to his fourteen-year old mother in 1937 in Surry, Virginia, he worked to help support six younger children.  Sherrod worked his way through Virginia Union College, receiving a B.A. in sociology in 1958. He earned a master’s in divinity from Union Theological Seminary in New York City in 1966.

Charles Sherrod joined SNCC in 1960, participating in the organization’s first demonstrations and voter registration drives. In October 1961, Sherrod became the first field secretary and SNCC director of southwest Georgia.  He and Cordell Reagon opened a SNCC office near Albany State College, an HBCU. On November 1, they launched a student sit-in at the bus terminal station to test the recently enacted law desegregating bus and train terminals.  When local law enforcement officials blocked the demonstrators, the single protest became the two-year Albany campaign. It eventually led to multiple protests by thousands of students as well as the involvement of Dr. Martin Luther King, a public plea from President John F. Kennedy to city officials, and resolution of the issue by local black leaders to resolve the issue. Ultimately the civil rights activists organized by Charles Sherrod would prevail.

Developing local leadership was a strong point in Sherrod’s leadership and was an important element in SNCC’s organizational model.  Rather than the SNCC or some other organization fighting for the “helpless” black community, the community organized itself with SNCC leaders facilitating that organization.

In August 1964, the all-white Democratic National Convention refused to give more than a few token positions to African Americans despite the efforts of the Mississippi Freedom Democratic Party (MFDP) in coalition with the SNCC.  Sherrod traveled to Atlantic City, the site of the Convention, to support MFDP.  He urged them to refuse the compromise offered by Hubert Humphrey, Walter Mondale, and other leaders of the Democratic Party.

In 1966, SNCC changed direction, electing Stokely Carmichael as chairman, embracing the philosophy of black power, and expelling white members. Sherrod left the organization. He returned to Albany, formed the Southwest Georgia Independent Voters Project, and began the agricultural collective New Communities Inc.  In 1976, Sherrod was elected to the Albany City Council, serving until 1990. In 1996, he ran unsuccessfully for Georgia State Senate, his last attempt at political office.

Charles Sherrod passed away on October 11, 2022 at his home in Albany, Georgia. He is survived by his wife, Shirley; his daughter Russia and son Kenyatta; three brothers and one sister; and five grandchildren. He was 85 years old.