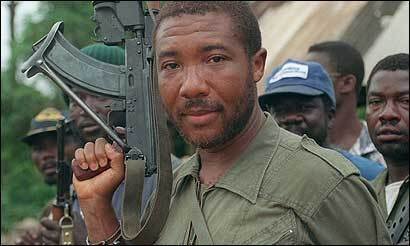 Charles McArthur Taylor, born on January 28, 1948, in Arthington, Liberia, served as the president of Liberia from August 2, 1997, to August 11, 2003.  Born to Nelson and Bernice Taylor, his mother was part of the Gola tribe, and his father was claimed to be an Americo-Liberian.  Taylor went to school at Bentley College in Waltham, Massachusetts, from 1972 to 1977, and earned a degree in economics.

As a student at Bentley, he joined the Union of Liberian Associates (ULA), and eventually became its national chairman.  He became increasingly politically active, and in 1979, led a demonstration in New York City, New York when then-Liberian President William Tolbert was visiting.  After Taylor returned to Liberia in 1980, he was appointed the head of the General Services Agency within the new Samuel Doe government, but was removed in 1983 after being accused of embezzling more than $900,000.  Taylor fled to the United States but was subsequently arrested in May of 1984 by U.S. Marshals in Somerville, Massachusetts.  Placed in a Plymouth, Massachusetts prison while awaiting extradition, he escaped in September of 1985, disappeared for four years and resurfaced in Liberia in 1989.  He quickly became the head of the National Patriotic Front of Liberia (NPFL), a guerilla movement opposed to the Doe regime in Monrovia.

Taylor’s challenge of the central government became a seven-year guerilla struggle known as the First Liberian Civil War.  Doe was overthrown and killed in 1990 at the beginning of the conflict by forces loyal to Prince Johnson, one of Taylor’s former commanders.  Johnson established a new government in Monrovia which Taylor then opposed.  The civil war ended in 1996 when the United Nations brokered an agreement between warring factions to hold a presidential election to determine the leadership of the nation.  Taylor became a candidate on the National Patriotic Party (NPP) ticket and won the August 2, 1997 election with 75 percent of the votes.

Once in power, Taylor increasingly shifted to a dictatorial rule, and was accused of many human-rights abuses and war crimes. He also sheltered various terrorist groups and members of Al Qaeda.  He sold arms to rebels in Sierra Leone and reportedly traded weapons for diamonds.  Taylor was been blamed for the many of Liberia’s internal conflicts, which displaced about a million people and forced about 300,000 others to leave the country. Taylor was finally forced from power in August 2003 by a multi-national force led by the Nigerian Army.

After having been forced to live in exile in Calabar, Nigeria, Taylor was arrested in March of 2006 and charged with war crimes.  He was then placed in the United Nations Detention Unit in The Hague, Netherlands to await trial by a Special Court in Sierra Leone.  Taylor’s trial began in January 2008.  He was found guilty in April 2012 and sentenced to 50 years in prison.