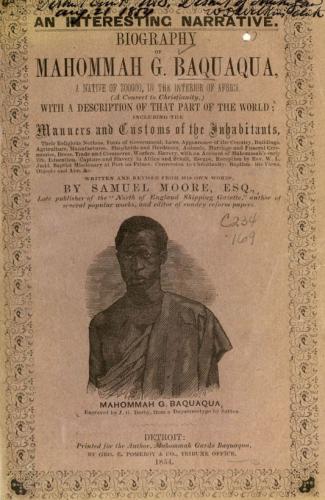 Mahommah Gardo Baquaqua’s biography is the only known biography of a former slave from Brazil. Baquaqua was born around 1824 near Djougou in modern day Benin to a Muslim merchant family.  Baquaqua was captured from Djougou in 1845 while acting as a messenger for a local king; he was taken to the coast and shipped to Recife, Brazil.  Originally he was sold to a local baker and soon after was sold to a ship’s captain based in Rio de Janeiro, Brazil.  After living in bondage for two years Baquaqua’s owner took him on a voyage to New York City, New York where local abolitionists helped Baquaqua secure his freedom in 1847.

Baquaqua spent the next two years in Port-au-Prince, Haiti with the Baptist Free Mission Society.  In 1848 Baquaqua, previously Muslim converted to Christianity and the Baptist missionaries continued to hope he would return to Africa to become a Christian missionary.  In 1849 Baquaqua returned to New York State where he enrolled in New York Central College in McGrawville, New York, remaining there until 1853. It is not known if he received a degree.

New York Central College was established by the American Baptist Free Mission Society to educate  white students and former slaves.  As such it was one of a handful of racially integrated colleges in the United States.  It was also the first college to hire African American faculty.

Baquaqua moved to Chatham, Canada West in modern day Ontario in 1853.  In 1854 Baquaqua’s biography was taken as an oral narrative while he spoke mostly in Portuguese, as he knew little English and no French.  He spoke fluent Dendi and Arabic which had been his native languages in Africa.  Although Baquaqua’s oral narrative was recorded in Portuguese while he resided in Canada, its target audience was the anti-slavery population of the United States.

In 1855 Baquaqua travelled to Great Britain, still intending to return to Africa one day as a missionary.  However, in 1857 all records of Baquaqua ceased and it is not known where or how he lived out his last days.