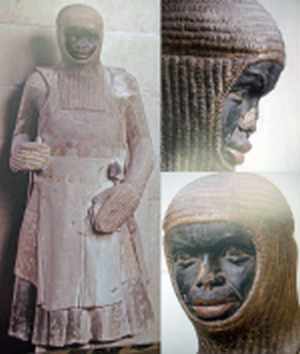 St. Maurice is commemorated throughout churches in modern Germany as a black African dressed as a Roman Solider.  That depiction originated with the renowned statue in the Cathedral of St. Catherine and St. Maurice in Magdeburg, Germany.  However, according to some historical authorities, he was probably not black and possibly never existed.  What is known is the date he became a saint and when he first became depicted as black.

In 287 AD, a Theban Legion of Christian Roman soldiers in Egypt led by Maurice was commanded by Emperor Maximian Hereculeus (ca. 250-ca. 310 AD) to march to Agaunum, now the modern day St-Maurice en Valais in Switzerland.  Exactly what Maurice’s Legion was ordered to do there by the Emperor is disputed:  they were either required to participate in pagan rites or to harass and kill local Christians.

Although many historical authorities claim the entire episode is a pure fabrication of Medieval Christian Church leaders, the image of a Christian solider refusing to denounce his faith and defying a pagan Emperor resonated with Medieval Christians.  To them Maurice’s sainthood was well deserved and the Church correctly venerated him.  Maurice later became the patron saint of the Holy Roman Empire and an altar dedicated to his memory was placed in the Vatican.

Until the mid-thirteenth century St. Maurice was depicted as a white Roman solider in full battle dress.  Following the refurbishment of Magdeburg’s Cathedral in 1240-1250 after it was damaged by fire, he was portrayed as a black African.  Why an unknown artist purposely changed the racial identity of Maurice is unknown.  Some have speculated that because he and his men were from Thebes in Upper Egypt and near Nubia, they were considered “Ethiopians” which in the Medieval European world was a generic description of all dark skinned people on the African continent.  Whatever the reason, the change marked the first artistic depiction of a black African in Medieval Europe.