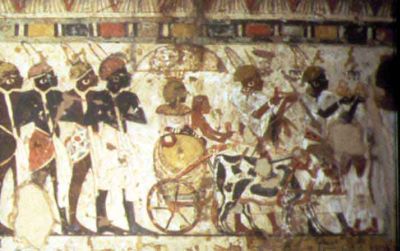 The ancient land of Nubia stretched from the Middle and Upper Nile River Valley, from the First cataract of the Nile River down to the merging of the White and Blue Nile Rivers.  Many cultures populated and fought over this region resulting in dynamic trade relations, political shifts and military conflicts. Egyptian sources refer to Nubia as Ta-Seti or the “Land of the Bow,” which describes the skilled archers of the region.

According to archeologists, Nubia emerged as a farming region around 3500 BC.  Excavations from over 75 villages and cemeteries in Nubia provide evidence of a culture centered on agriculture, animal husbandry and commerce.  Towards the end of the fourth millennium BC, a centralized state had emerged at the capital, Qustul, which controlled the trade routes between Egypt and the African interior. This culture flourished until about 3000 BC when the First Dynasty of Egyptian kings conquered the region.  Additionally, shifts in the Nile River forced many Nubian settlements to relocate for survival.

By 2600 BC, a new culture dominated the Middle Nile River Valley.  Scholars debate whether this culture evolved from the earlier inhabitants or represented immigrants moving into Lower Nubia.  Artifacts from this culture reveal a more sophisticated ceramic industry known for its distinctive black pottery decorated with incised and white-painted designs.  Pottery, basketry, and beadwork as well as elaborate burial sites reflect a growing sophistication of the population.  Remains of rectangular houses of stone and mud-brick indicate that new building materials and construction techniques were being used.

The people of Lower Nubia by 2500 BC found themselves between two powerful rivals, Egypt in the north and the Kingdom of Kush in the south.  Kushite rulers established capitals at Kerma and later Napata along the Nile. The Kushite kings vied with Egyptians for control of trade routes from the interior of Africa to the coast for Mediterranean trade.  Because of the fragmentation of central authority in Egypt, Kushite kings ruled Egypt for almost a century as the 25th Dynasty.  Nubia was controlled briefly by Kush but it was a province of various Egyptian kings for nearly 3,000 years.   At the end of the sixth century AD, Byzantine missionaries travelled through Nubia and converted the Nubians to Christianity.  This conversion marks the shift into the medieval period of Nubian history.