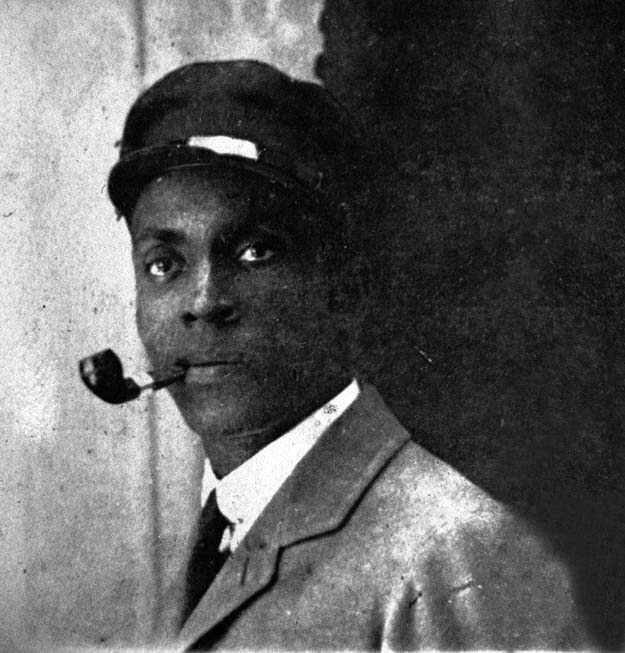 Yale University literature scholar and historian Vladimir Alexandrov introduces The Black Russian— his new biography of a forgotten African American who led an extraordinary life in Russia and Turkey at the beginning of the twentieth century.

The story of this book began six years ago, when I read a sentence that changed my life.

I was reading the memoirs of Alexander Vertinsky, a singer who was very popular in Russia before the Revolution and in Europe in the 1920s, when I came to a remark that made me stop.  Vertinsky described how he escaped from the Bolsheviks in the south of Russia in 1920 and landed in Constantinople, where he began to perform in an entertainment garden that belonged, as he phrased it, “to our famous Russian Negro Fyodor Fyodorovich Tomas, the owner of the famous ‘Maxim’ in Moscow.”

I was so surprised that I put the book down.  I had never heard of this “Tomas,” and the idea that a black man with a Russian first name and patronymic had been well known for owning an entertainment venue in pre-Revolutionary Moscow seemed wildly improbable.  I knew that people of African origin had always been very rare in czarist Russia.  In fact, the best-known black person, Abram Hannibal, lived in the 18th century (and is remembered largely because he was the ancestor of Alexander Pushkin, Russia’s great national writer).  The well-documented visits by such prominent black Americans as the writers Claude McKay and Langston Hughes, or the actor and singer Paul Robeson, did not take place until the Soviet era years later.

Who was this “Fyodor Fyodorovich Tomas” and where did he come from?  Why did he go to Russia?  How did he prosper there to the extent of being famous and owning property?  How did Russians react to his being black?  How did he wind up in Constantinople?  And why had he been forgotten?

I started digging through Yale’s rich library holdings, but after considerable effort came up with very little—only a half-dozen brief and contradictory references to this “Tomas.”  However, by then I was already hooked.  I was also fortunate in having a year-long sabbatical ahead of me, and I decided to dedicate it entirely to finding out who this enigmatic man was.  In the end, I wound up doing research in a labyrinth of archives and libraries in the United States, Russia, France, England, and Turkey.  And what I found far exceeded my expectations.

This man’s real name was Frederick Bruce Thomas, and he was born in 1872 to former slaves in Coahoma County, Mississippi.  It is clear that he got his wings from his parents, who were remarkable people, and whose life was marked by extraordinary achievements.  The first was that they acquired a two-hundred acre farm in 1869, at a time when most of the land in this part of the South belonged to a handful of white families and the vast majority of black people, who constituted three-quarters of the population, owned nothing.  Thomas’s parents stood out as well because in 1879 they donated land to establish one of the first African Methodist Episcopal churches in the region.  This is where Thomas began to acquire the rudiments of an education—also an exceptional experience at a time when most black people were illiterate.

However, since the Thomas family lived in the Delta—which has been called the most Southern place on earth—their prominence was also the cause of their ruin.  In 1886, a rich white planter who resented their success tried to steal their land.  Initially, the Thomases fought back in court, which was a very brave and very uncharacteristic thing for black people to do.  Even more unusual is that the Thomases won the first round.  But when the planter appealed to the Mississippi Supreme Court in 1890, the Thomases decided it would be prudent to get out of harm’s way and moved to Memphis.  There, a second tragedy struck:  Frederick’s father was brutally murdered and the family disintegrated.

Every step that Frederick Thomas took after this was exceptional for a black American.  Several decades before the Great Migration began, he left the South and went to Chicago and then Brooklyn, which had miniscule black populations at the end of the nineteenth century.  Seeking even greater freedom, he went to Europe in 1894, several decades before some black Americans began to seek a haven in Paris.  And in 1899, after crisscrossing the Continent, mastering French, and honing his skills as a waiter and a valet, he signed on to accompany a nobleman to Russia.  In Moscow, before the Revolution, there were probably no more than a dozen permanent black residents out of a population of over a million.

Thomas’s career in Moscow proved to be more successful than he, or anyone else, could ever have imagined.  He found no “color line” there, as he put it, and in a decade went from being a waiter, to a maître d’hôtel, to a senior assistant to the owner of the swankiest restaurant in the city—the famous “Yar,” a favorite of millionaires, grand dukes, and Gregory Rasputin, imperial Russia’s extraordinary evil genius.  Thomas was so good at his job and made so much money from munificent tips that in 1911, together with two Russian partners, he rented a large entertainment garden called “Aquarium” near the city center that had recently failed.  Within a year, “Thomas and Co.” transformed it into one of the most successful venues for popular theatrical entertainment in Moscow, a status that it kept until the Revolution.  In 1912, Thomas reinvested his profits in a variety theater in the center that he named “Maxim” and that also immediately became a favorite of Moscow’s night owls.  Occasional American tourists who passed through Russia on their European tours would report their astonishment back home at having encountered a “prosperous” and “diamond bedecked” black American in such an unexpected setting.

Were it not for the Bolshevik Revolution of 1917, Frederick Thomas would have happily spent the rest of his life in his adopted country.  He married twice, acquired a mistress who became his third wife, and fathered five children.  He also took Russian citizenship, and was quite possibly the first black American ever to do so.  When the Great War began and prohibition was announced, Thomas, like American bootleggers a half dozen years later, cashed in.  He made so much money that he was able to buy a handsome villa in Odessa and a block of investment properties in Moscow.  But when the Bolsheviks seized power, the American immigrant from the Mississippi Delta suddenly discovered that he was on the wrong side of history.  His past oppression as a black man in the United States was trumped by his having become rich, and nothing could mitigate this class “sin.”

To save himself, Thomas fled from Soviet Russia.  In 1919, after surviving hair-raising perils, he managed to reach Constantinople with most of his family.  Although he had lost all his wealth, within three months of arriving he opened an entertainment garden on the city’s outskirts.  At first, debts almost sank him, but through perseverance, imagination, and guile he managed to prevail and quickly emerged as the city’s preeminent nightclub owner.  He was also the first to import jazz to Turkey, and its popularity among the city’s natives and swarms of well-heeled tourists consolidated his success and made him rich once again.

However, after escaping from Russia, Thomas was never again free of the burden of race, and it would be his undoing.  To the Turks his skin color was of no concern; the Ottoman Empire was racially heterogeneous and did not parse the world the way white America did.  But Thomas could not avoid dealing with the diplomats in the American Consulate General in Constantinople, or with their racist superiors in the State Department.  When he most needed their help, they refused to recognize him as an American and to give him legal protection.  Abandoned by the United States, and caught between the xenophobia of the new Turkish Republic and his own extravagance, he fell on hard times, was thrown into debtor’s prison, and died in Constantinople in 1928.

At the beginning of the twentieth century, white America had no interest in celebrating black achievement.  This is the primary reason why Frederick Bruce Thomas is now virtually forgotten.  Very few American newspapers noticed his passing.  One that did was The New York Times, and on July 8, 1928, in an article about Constantinople referred to him as the city’s late “Sultan of Jazz.”