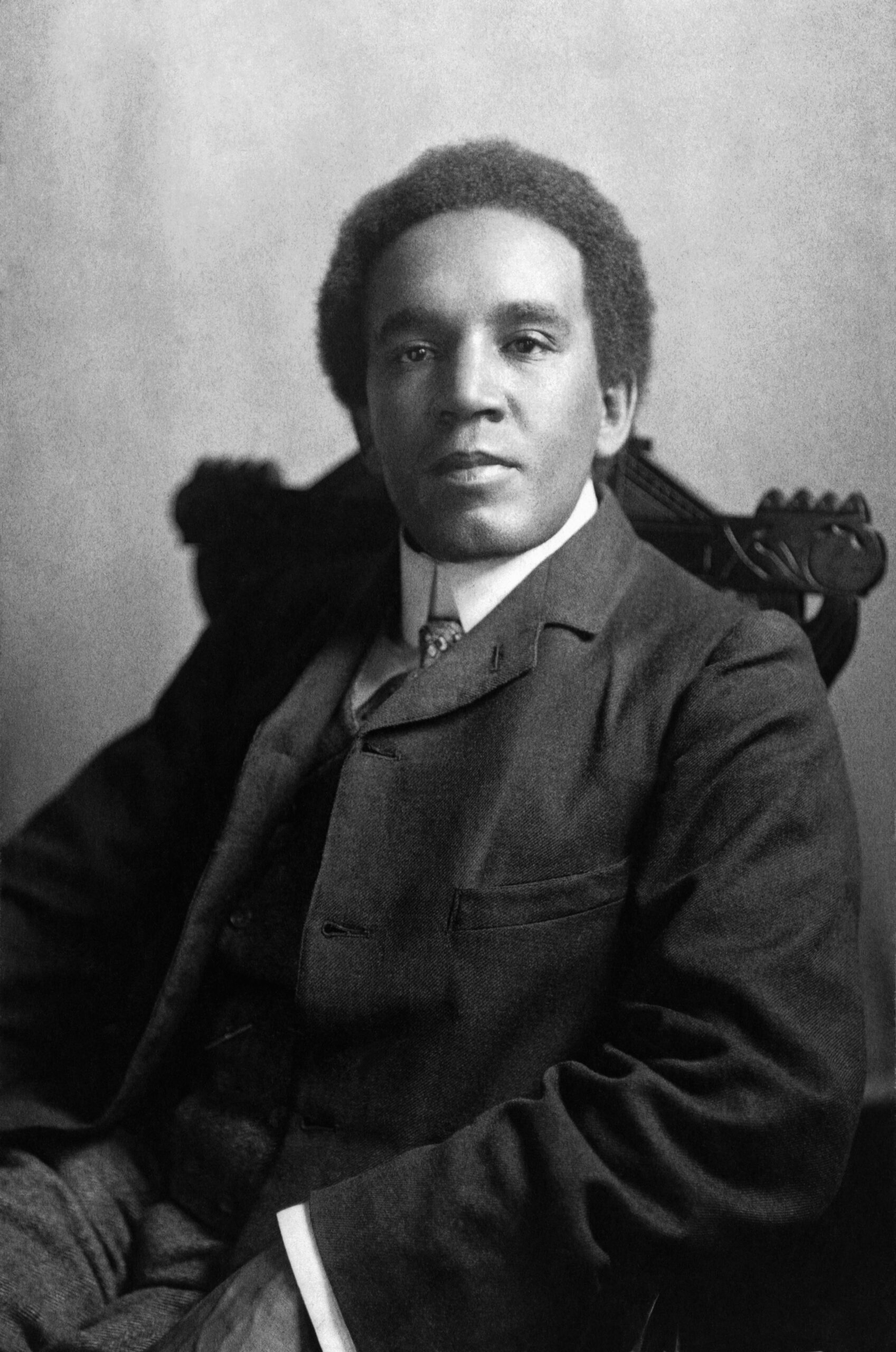 In the article below Hilary Burrage, Executive Chair of the Samuel Coleridge-Taylor Foundation, a United Kingdom (UK)-based non-profit organisation, describes the composer and how she came to regard and preserve his work and legacy.

It has taken three times the duration of his own lifetime for the reputation of Samuel Coleridge-Taylor, Britain’s greatest black classical composer, to begin to make an impact on our contemporary world.  At the time of his tragically early death in 1912, aged 37 from a chest infection, Coleridge-Taylor was a nationally feted musical figure.  His Hiawatha Trilogy of staged opera-cantatas based on the poem by Longfellow were massive commercial successes even though he gained almost nothing from them financially.

After Coleridge-Taylor’s death, the works fell slowly from collective consciousness and favour.  Until the mid-1930s annual fortnight performances of Hiawatha at the Royal Albert Hall were a highlight of London’s cultural scene.  By the 1960s however, when as a (white) schoolgirl in Birmingham, UK, I was involved in a concert production of the cantata, my friends and I were totally unaware that the composer was a person of mixed race.

Nor did we know of the personal challenges Coleridge-Taylor had faced.  He was born illegitimate in 1875, in Holborn, a (then) harshly impoverished area of central London, to Daniel Peter Hughes Taylor (c1848-1904), a London-trained surgeon who returned home to Sierra Leone and probably never knew of Samuel’s existence, and eighteen-years-old Alice Hare Martin (1856-1953), daughter of Emily Ann Martin.

A year or two after Samuel’s birth, demolition of their squalid Holborn home saw Alice removed to Croydon just south of London. There, she continued to live with Benjamin Holmans (a farrier), his wife Sarah and their children, a ‘housekeeper,’ perhaps Emily Martin, and, later, with her (railway worker) husband George Evans and subsequent offspring. Conjecture suggests Benjamin may have been Samuel’s maternal grandfather since various members of the family were musically inclined.

These early works were, however, almost immediately eclipsed by the Hiawatha Trilogy written between 1898 and 1900. The Trilogy remains Coleridge-Taylor’s only well-known legacy, all of it completed by the age of 25, by which time he was married to fellow RCM student Jessie Fleetwood Walmisley (1869-1962).  They had two children, Hiawatha (1900-1980) and Gwendolen (later ‘Avril,’ 1903-1998), also both to become professional musicians.

Hiawatha productions were extraordinarily complex affairs with elaborate staging involving hundreds of performers and backstage personnel, generating in effect a cottage industry. This exuberant activity was partly embedded in the professional ambition of producers and performers and partly in the excitement engendered in local communities at the prospect of involvement in such an ‘exotic’ project.  My mother and aunt still clearly recall as schoolgirls a 1930s Hiawatha production in Southampton.  There were also productions in many other towns and cities in England including even tiny fishing towns like Mevagissey, in Cornwall.

These productions also indicate that the impact of Samuel Coleridge-Taylor stretched far beyond his mere two decades as a composer.  Nonetheless, this unique man in British music remains an enigma.  Many know his most famous work but few appreciate Coleridge-Taylor’s background, or how he came to reach the top of his profession.  Still fewer understand that his own sense of fairness and his personal equanimity helped him to bear the crude and racially-driven unkindness of some others with remarkable patience and fortitude.

Nor do we yet know much about Coleridge-Taylor’s impressively large musical output, though we are beginning to learn. It was this search for his music that led me again to Coleridge-Taylor some quarter century after my schoolgirl encounter.  My husband, Martin Anthony [‘Tony’] Burrage, a violinist in the Royal Liverpool Philharmonic Orchestra, and I were deeply concerned when our city became mired in the aftermath of the ‘Toxteth riots’ in the 1980s.  Liverpool’s Philharmonic Hall is just a few minutes away from the grim events of that time, and we wanted very much to find a bridge between the music which flowed from The Phil, and the sobering experience of our near community-based neighbours.

It was then that Tony, who had studied the Elgar Violin Concerto at the Royal Academy of Music in London, recalled that a younger composer whom Sir Edward Elgar had supported was of mixed race.  That composer was Samuel Coleridge-Taylor.  So began our effort to track down his music, no easy task in the 1980s and 1990s, before the Internet.  The search was also made more difficult not only because no Trust or Foundation was established on Coleridge-Taylor’s death, but also because some scores and artefacts had been distributed without much by way of record.

Nonetheless, we persevered, eventually locating the published Fantasiestücke Op.5 and, to our astonishment, discovering the original hand-written score of the Op.1 Piano Quintet in archive at the Royal College of Music.  From this Tony prepared part-scores, then set a formal recital date.  Eventually on November 7, 2001 the Quintet, and the Op.5, were performed by him and RLPO colleagues in the Liverpool Philharmonic, 108 years after the original, possibly only, public concert, by Coleridge-Taylor and his fellow students at the RCM, in 1893.

During this time of discovery, we developed our commitment to bring Samuel Coleridge-Taylor’s music to our own era. For over a decade spanning the Millennium we located and brought to performance by community-based musicians at our annual Hope Street Festival in Liverpool a whole range of works including the African Suite, the Bamboula, and other pieces which had collected dust for decades.

Our musical curation brought with it much that we could not have imagined when we began.  Coleridge-Taylor’s oeuvre is vastly larger than we had imagined; and is always skilled, often inspired.  We saw that this Englishman of mixed race had reached out to embrace not only his Englishness but other European musical giants of his time, including Brahms and especially Dvorak, as well as his teachers and sponsors, such as Sir Charles Villiers Stanford and Elgar.

We learned that Coleridge-Taylor grappled with notions of ‘other’ cultures and influences. Hiawatha is an example where he reflected personal life experience in significant ways; but he also embraced other locations and times, for instance in the Tale of Old Japan and in the Nordic opera, Thelma, bringing the ‘exotic’ into the rigid frameworks of Victorian-influenced classical music.

One other exciting revelation emerged from this voyage of discovery: we were not alone.  Shortly after the Piano Quintet recital we made contact with Daniel Labonne, who founded the Samuel Coleridge-Taylor Society in Croydon.  Daniel persuaded us to develop the Samuel Coleridge-Taylor Foundation which I now lead, which is dedicated to promoting the life and legacy of the composer.  Daniel also introduced us to others who could share in our explorations.  That voyage, with now the huge benefit of the Internet, led to collaborations in both the UK and the USA which have enormously enriched our knowledge and our personal lives.  Forums such as the SCT LinkedIn group have emerged, and we work closely with colleagues such as Dr Dominique Rene de Lerma and William Zick in the United States.

That trans-Atlantic collaboration reflects yet another critical part of the Samuel Coleridge-Taylor story, since he too reached across the ocean. Three times in the first decade of the twentieth century he sailed from Liverpool to New York.  Sensitive to racial restrictions in the United States, he travelled to America only when he was persuaded that he would work with both white and black musicians.

Coleridge-Taylor was aware of issues of colour all his life.  At twenty-five, he was a founding member of the first Pan-African Conference, in London in 1900.  That conference brought together leading black intellectuals and artists from around the world.  Coleridge-Taylor had already been influenced by the writing of various poets and artists of colour as he matured and the conference reinforced that influence.  In the last decade of his life he sought to understand what would now be termed black consciousness.

Unfortunately, there was to be no extended period of blossoming social insights or artistic maturation.  Samuel Coleridge-Taylor contracted pneumonia at a time before antibiotics and died in his Croydon home on September 1, 1912, aged 37.  We can only surmise how his developing interest in black issues might have taken shape had he lived to see the emergence of new black-inspired musical genres such as jazz and blues in New York and other U.S. cities in the 1920s.  Nor can we be sure how the growing articulation of equal rights throughout the world might have affected his thinking.

Perhaps with a greater sense of security and wider experience Coleridge-Taylor would have become a noted spokesman for equality; perhaps he would have turned from the necessity to produce money-spinning music back to the talents he displayed so early on as a composer of chamber music.

There is much we still don’t know, but can and will discover.  Some questions we shall never resolve.  But one thing is clear; the spirit of Samuel Coleridge-Taylor continues to touch the lives of many in ways which bring great pleasure.  His story is one we would all do well to follow.