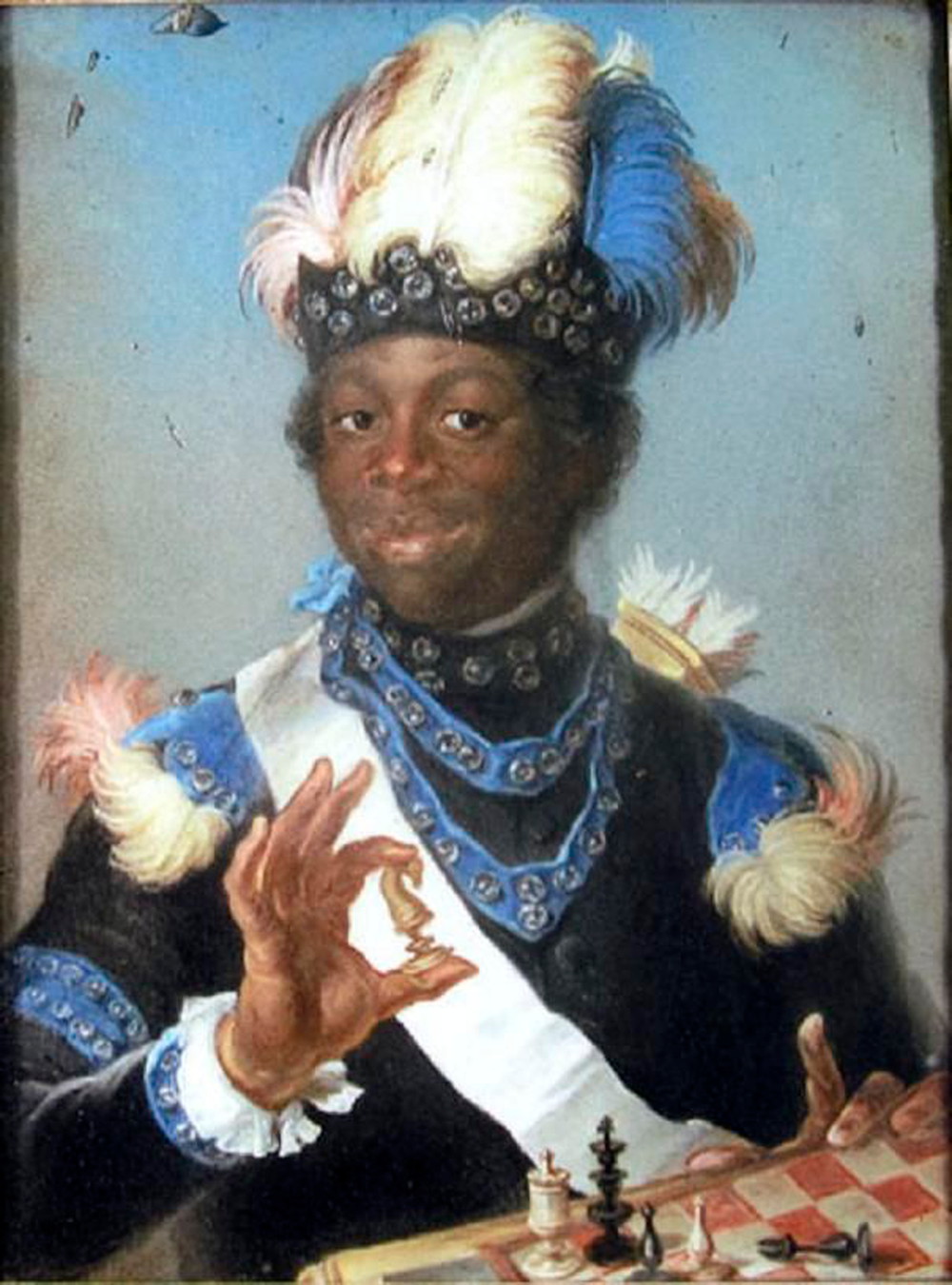 Adolf Badin, also known as Adolf Ludvig Gustav Fredrik Albert/Couschi, was born in St. Croix, Danish West Indies in 1747, and died in 1822 in Sweden.  Badin came to Sweden a slave but became a titled person in the courts of King Fredrick and Queen Ulrika during their reign (1751-1771).  Badin married twice: first to Elisabet Svart in 1782, and then to Magdelena Eleonra Norell in 1799; he had no children. Badin has been described by his many court functions: assessor, page, footman, jester, diarist, servant, chamberlain, court secretary, ballet master, book collector. However, he preferred to call himself “farmer,” as he eventually owned two small farms, one in Svartsjolandet and the other in Sorunda.

Badin’s real last name was Couschi, but he was christened as Badin, which signifies “prankster.” He’s also been referred to as “Morianen” which was the colloquial name for African Diasporians in Europe at that time.

At the age of seven, Couschi was purchased in St. Croix and taken to Europe by a Danish sea captain who gave the boy to Queen Louisa Ulrika of Prussia (Queen of Sweden, 1751-1771) as a gift. Aristocratic ladies of that time considered it fashionable to have black pages in their palaces. Eva Engblom, a Swedish amateur scientist, who examined evidence of Moors (North and West Africans) in Europe, estimates that between 50 and 100 people of African descent were brought to Sweden during this time.

Queen Louisa Ulrika reigned during Sweden’s Age of Liberty (1718-1772), a period of political and scientific enlightenment.  She founded the Swedish Academy of Science, which studied provocative thinkers of this era.  Carl Linnaeus, the father of modern taxonomy, and Jean Jacques Rousseau, the major Western political and educational philosopher of the era, both captured the Queen’s attention.  Some say that Badin was her experiment in that she wished to prove Rousseau’s theories of educational development including the then radical idea that children learned best by experiencing consequences rather than by coercion.  Badin was allowed to roam freely in the royal palaces and was mentored and trained to become as highly educated as any European aristocrat of that period.  He learned and spoke German, French, and Latin fluently. He was treated as a sibling of the Queen’s four children including Sofia Albertina who later became Badin’s patron.  Consequently, Badin enjoyed intimate familiarity with Swedish royalty for the duration of his life.

At the age of 21, Badin was christened in the Chapel of Drottningholm Palace outside Stockholm and given all of the names of his listed sponsors:  Adolf, Ludvig, Gustav, Fredrik, and Albert. He now accompanied the Queen on diplomatic missions and became a roving ambassador for the Swedish court. He also managed three royal palaces, collected books, and kept extensive journals. His diaries, written in French, are now archived in the library of Uppsala University. Badin’s book collection, numbering 800-900 volumes, was sold upon his death. Some historians note Badin as the first recorded book collector of African origin.

In 1782, upon Queen Ulrika’s death, Badin served three successive Swedish monarchs beginning with his childhood friend, King Gustav III who was murdered in 1792, Gustav IV (1792-1809), and Karl XIII (1809-1818). Despite his respect and devotion to Swedish royalty, Badin was rarely mentioned in Swedish history texts. He died in 1822 in Stockholm at the age of 75. His remains are buried in the Katarina Cemetery in Stockholm.

To view products related to Adolf Badin in the BlackPast Store click here.