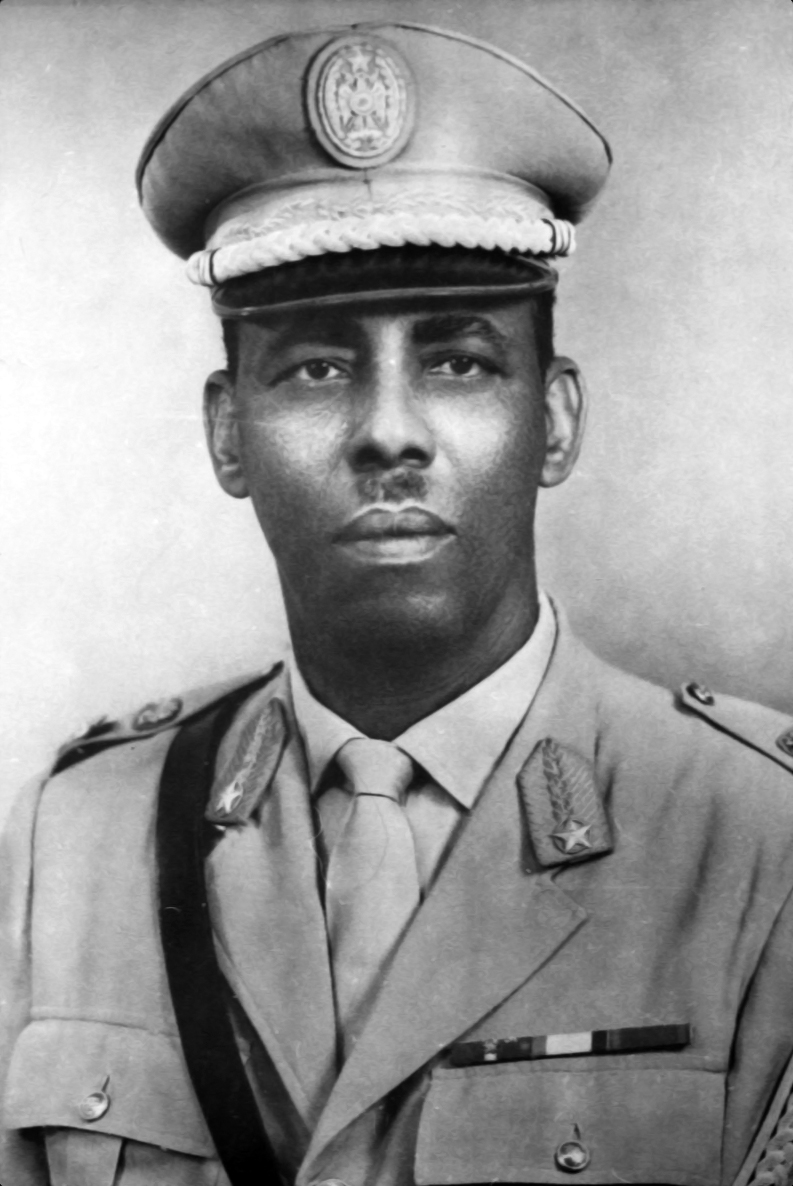 Mohamed Siad Barre (Maxamed Siad Barre) was a military general in Somalia and the country’s third president. He came into power in October of 1969, leading a coup d’état against the elected government. Barre ruled over Somalia until 1991 when he was overthrown by militias, leading the country into a bloody civil war.

Barre was born in Shilabo, Ethiopia, in 1910 to a nomadic family from the Marehan clan. He spent his formative years attending school in Luuq, Italian Somaliland, and Mogadishu for his secondary education. He later joined the colonial police force. After Somalia gained independence in July of 1960, Barre became the Vice Commander of the Somali National Army.

In 1969, Somalia’s President Abdirashid Ali Sharmarke was assassinated, and a military group, the Supreme Revolutionary Council (SRC), staged a coup d’état, allowing Barre to assume power. Barre dissolved the constitution, parliament, and arrested politicians from the previous regime. The SRC renamed the country The Somali Democratic Republic and declared it a Marxist-Leninist one-party state. Barre adopted scientific socialism based on the teachings of the Quran and Marxism. He tried to rapidly industrialize and modernize the country by creating a new writing system, promoting cooperative farming, and leading an anti-tribal campaign. During Barre’s regime, all of Somalia’s major industries, from farming and oil to banking, were nationalized.

Barre pushed the idea of a Greater Somalia which refers to joining areas that Somalis are indigenous to, which includes Djibouti, the Ogaden in Ethiopia, and Kenya’s North Eastern Province. In July 1977, the Ogaden War broke out after the Barre’s administration tried to unite all these regions into Greater Somalia, starting with the Ogaden. The Somali National Army attacked Ethiopia, which was then under the socialist regime governing the nation. Somali armies were able to capture a significant part of Ogaden, but the war led the Soviet Union to shift their support from Somalia to Ethiopia. After the Soviets’ decision, the socialist world turned its back on Somalia. With the help of 15,000 Cuban troops, the Ethiopians pushed the Somali soldiers out of Ogaden in 1978. Somalia in turn cut its ties with the Soviet Union and switched its allegiance to the United States.

Discontent against the Barre regime grew after Somalia’s defeat in the Ogaden War. With the country’s economic sector crumbling, the entire nation faced a financial crisis, intensified by growing corruption among government officials. Although Barre led an “anti-tribalism” movement early in his regime, he now singled out the Isaaq tribe and subjected them to arbitrary arrests, rape, and torture. He also formed the Red Berets, a paramilitary unit to brutalize other clans. Consequently, many of them formed militia groups often supported by Ethiopia.

By the end of the 1990s the rebel group, Somali National Movement and other armed militias stormed the capital at Mogadishu forcing Barre to flee to Gedo, Somalia in January 1991. Unable to regain control of Mogadishu which was now under the control of the warlord Mohamed Farrah Aideed. Barre fled Somalia for Nairobi, Kenya and then Lagos, Nigeria. He died in Lagos on January 2, 1995 at the age of 85 and was buried in Gedo, Somalia.