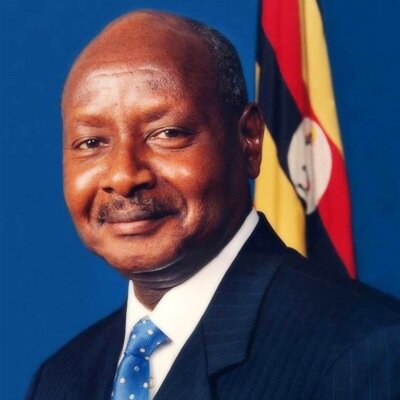 Yoweri Kaguta Museveni is the President of Uganda, a post he has held since 1986. Museveni was born on September 15, 1944, to Mzee Amos Kaguta and Esteri Kokundeka Nganzi in Rukungirl, British Protectorate of Uganda (now Uganda). At an early age, Museveni moved to Ntungamo, Uganda Protectorate. He attended Kyamate Elementary School, Mbarara High School, and Ntare School. After graduating from high school, Museveni attended the University of Dar es Salaam beginning in 1967. While attending the University, Museveni studied economics and political science. He also became a Marxist and became involved in radical Pan-African politics. He formed the University Students African Revolutionary Front, an activist group, and led a student delegation to FRELIMO-held territory in Portuguese-controlled Mozambique where he received guerrilla training.

In 1981, a civil war called the Ugandan Bush War pitted former Ugandan President Milton Obote and the National Resistance Army (NRA) led by Museveni. This five-year conflict lasted from 1981 to 1986 and resulted in an NRA victory and Museveni becoming the new President of Uganda. Despite his Presidency, guerrilla wars continued until 1994 as various factions attempted to overthrow the new government.

In 1996, the first presidential elections under Museveni’s government were held. He defeated candidates Paul Ssemogerere and Kibirige Mayanja. During that same year, Museveni led Uganda to intervene in the Second Congo War where he assisted Rwanda and Laurent-Desire-Kabila of the Alliance of Democratic Forces of the Liberation of the Congo (ADFLC) in an attempt to overthrow longtime dictator President Mobutu Sese Soko. Museveni led Uganda’s involvement in the Third Congo War in 1998 when he allied with Rwanda against Laurent-Desire-Kabila Kabila’s new government that only two years earlier he helped install in power.

In 2001, Museveni won reelection by defeating Presidential candidate Kizza Besigye. He would defeat Besigye in three reelection campaigns, 2006, 2011, and 2016. In 2021, Museveni won reelection for a sixth term against Robert Kyagulanyi “Bobi Wine” Ssentamu. This election was hard-fought, and Wine and his followers charged the government with intimidating his supporters and rigging the election. Nonetheless, Museveni remains in power in Uganda after 35 years as President.