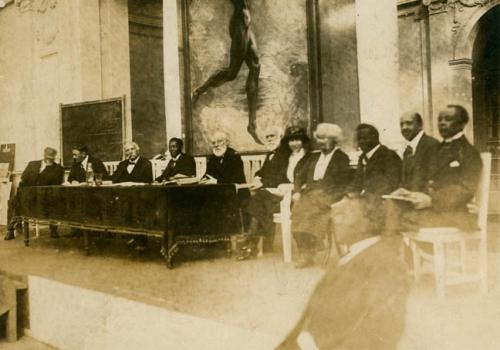 In the nearly half century between 1900 and 1945, various political leaders and intellectuals from Europe, North America, and Africa met six times to discuss colonial control of Africa and develop strategies for eventual African political liberation. In the article that follows, historian Saheed Adejumobi describes the goals and objectives of these six Pan African Congresses and assesses their impact on Africa.

Pan-Africanist ideals emerged in the late nineteenth century in response to European colonization and exploitation of the African continent. Pan-Africanist philosophy held that slavery and colonialism depended on and encouraged negative, unfounded categorizations of the race, culture, and values of African people. These destructive beliefs in turn gave birth to intensified forms of racism, the likes of which Pan-Africanism sought to eliminate.

As a broader political concept, Pan-Africanism’s roots lie in the collective experiences of African descendants in the New World. Africa assumed greater significance for some blacks in the New World for two primary reasons. First, the increasing futility of their campaign for racial equality in the United States led some African Americans to demand voluntary repatriation to Africa. Next, for the first time the term Africans, which had often been used by racists as a derogatory description, became a source of pride for early black nationalists. Hence, through the conscious elevation of their African identity, black activists in America and the rest of the world began to reclaim the rights previously denied them by Western societies.

In 1897, Henry Sylvester-Williams, a West Indian Barrister, formed the African Association in London, England to encourage Pan-African unity; especially throughout the British colonies. Sylvester-Williams, who had links with West African dignitaries, believed that Africans and those of African descent living in the Diaspora needed a forum to address their common problems. In 1900, Sylvester-Williams organized the first Pan-African meeting in collaboration with several black leaders representing various countries of the African Diaspora. For the first time, opponents of colonialism and racism gathered for an international meeting. The conference, held in London, attracted global attention, placing the word “Pan-African” in the lexicon of international affairs and making it part of the standard vocabulary of black intellectuals.

The initial meeting featured thirty delegates, mainly from England and the West Indies, but attracted only a few Africans and African Americans. Among them was black America’s leading intellectual, W.E.B. DuBois, who was to become the torchbearer of subsequent Pan-African conferences, or congresses as they later came to be called. Conference participants read papers on a variety of topics, including the social, political, and economic conditions of blacks in the Diaspora; the importance of independent nations governed by people of African descent, such as Ethiopia, Haiti, and Liberia; the legacy of slavery and European imperialism; the role of Africa in world history; and the impact of Christianity on the African continent. Perhaps of even greater significance was the formation of two committees. One group, chaired by DuBois, drafted an address “To the Nations of the World,” demanding moderate reforms for colonial Africa.

The address implored the United States and the imperial European nations to “acknowledge and protect the rights of people of African descent” and to respect the integrity and independence of “the free Negro States of Abyssinia, Liberia, Haiti, etc.” The address, signed by committee chairman DuBois as well as its president Bishop Alexander Walters, its vice president Henry B. Brown, and its general secretary Sylvester-Williams, was published and sent to Queen Victoria of England. The second committee planned for the formation of a permanent Pan-African association in London with branches overseas. Despite these ambitious plans, the appeals of conference participants made little or no impression on the European imperial powers who controlled the political and economic destiny of Africa.

It was not until after World War I that DuBois revived the Pan-African congresses. Following the war, European and American politicians gathered for a peace conference in Versailles, France. DuBois, who attended the conference as a special representative of the National Association for the Advancement of Colored People (NAACP), appealed to President Woodrow Wilson. In a letter to Wilson, he urged the American government to initiate a comprehensive study of the treatment of black soldiers. Moreover, DuBois expressed hope that the peace treaty would address “the future of Africa” and grant self-determination to the colonized peoples. President Wilson subsequently released a Fourteen Point memorandum, which suggested the formation a League of Nations and called for “an absolutely impartial adjustment of all colonial claims, based on the principle that the interests of the population must have equal weight with the equitable claims of the government.” Although historians have questioned the impact DuBois’s request had on Wilson’s Fourteen Point memorandum, it was apparent that the loudest voice on behalf of oppressed blacks in the New World and colonized Africa belonged to the participants of the Pan-African Congress.

Galvanized by the gathering of world leaders and the discussion of colonial Africa’s future, DuBois proposed the formation of a Pan-African Congress. In 1919, as the Versailles Peace Treaty deliberations ran their course, DuBois, with the support of Blaise Diagne, a member of the French Parliament from the West African colony of Senegal, and funding from African American civil rights and fraternal organizations such as the NAACP, the Elks, and the Masons, convened a Pan-African Congress in Paris. The Congress, attended by approximately sixty representatives from sixteen nations, protectorates, and colonies, however, was more “pan” than African since most of the delegates had little, if any, first-hand knowledge of the African continent. Prominent American attendees included black members of the NAACP such as John Hope, president of Morehouse College, and Addie W. Hunton, who had served with black troops in France under the auspices of the Young Men’s Christian Association (YMCA), as well as white NAACP members, such as the Columbia University professor Joel Spingarn, the socialist William English Walling, and the socialist muckraking author Charles Edward Russell. Among the other delegates from the United States were Roscoe Conklin Simmons, a well-known black orator; Rayford W. Logan, who had served with the U.S. Army in France; black women’s rights activist Ida Gibbs Hunt; and Dr. George Jackson, a black American missionary in the Congo.

Conference participants adopted a resolution calling for the drafting of a code of law “for the international protection of the natives of Africa.” Other demands called for direct supervision of colonies by the League of Nations to prevent economic exploitation by foreign nations; to abolish slavery and capital punishment of colonial subjects who worked on the plantations of European colonial powers in Africa, especially in the Belgian Congo; and to insist on colonial peoples’ right to education. Moreover, the gathering stressed the need for further congress meetings and suggested the creation of an international quarterly, the Black Review, which was to be published in several languages. While congress attendees insisted that African natives should be allowed eventually to participate in their own government, they did not demand African self-determination. Despite the moderate nature of the demands, the European and American powers represented at the Versailles Peace Conference remained noncommittal.

The Pan-African Congress reconvened in London in August 1921 and a month later in Brussels, Belgium. Both meetings featured representatives from the Americas, the Caribbean, Europe, and Africa who echoed earlier Pan-Africanist reformist ideas, denouncing imperialism in Africa and racism in the United States. Moreover, the delegates demanded local self-government for colonial subjects and DuBois stressed the need for increased interracial contacts between members of the black intelligentsia and those concerned about the political and economic status of colonial peoples.

In 1923, the Pan-African Congress met in two separate sessions in London and in Lisbon, Portugal. Noted European intellectuals such as H.G. Wells and Harold Laski attended the London session. Several members of previous meetings participated in the deliberations that addressed the conditions of the African Diaspora as well as the global exploitation of black workers. While some scholars argue that the 1921 and 1923 congresses were effective only in keeping alive the idea of an oppressed people trying to abolish the yoke of discrimination, others claim that the international gatherings laid the foundation for the struggle that ultimately led to the political emancipation of the African continent.

Delegates reconvened for a fifth Pan-African Congress in New York in 1927. The congress featured 208 delegates from twenty-two American states and ten foreign countries. Africa, however, was represented only sparsely by delegates from the Gold Coast, Sierra Leone, Liberia, and Nigeria. The small number of African delegates was due in part to travel restrictions that the British and French colonial powers imposed on those interested in attending the congress, in an effort to inhibit further Pan-African gatherings. Most of the delegates were black Americans and many of them were women. The congress was primarily financed by Addie W. Hunton and the Women’s International League for Peace and Freedom, an interracial organization that had been founded in 1919 by opponents of World War I. Similar to previous Pan-African congresses, participants discussed the status and conditions of black people throughout the world.

The financial crisis induced by the Great Depression and the military exigency generated by World War II necessitated the suspension of the Pan-African Congress for a period of eighteen years. In 1945, the organized movement was revived in Manchester, England. It is unclear whether DuBois or George Padmore, a West Indian Marxist, provided the initiative for this meeting. Recognizing DuBois’s historic contribution to the Pan-African movement, delegates named him president of the 1945 congress. The Manchester meeting marked a turning point in the history of the gatherings. For the first time representatives of political parties from Africa and the West Indies attended the meetings. Moreover, the conservative credo of the forum gave way to radical social, political, and economic demands. Congress participants unequivocally demanded an end to colonialism in Africa and urged colonial subjects to use strikes and boycotts to end the continent’s social, economic, and political exploitation by colonial powers.

While previous Pan-African congresses had been controlled largely by black middle-class British and American intellectuals who had emphasized the amelioration of colonial conditions, the Manchester meeting was dominated by delegates from Africa and Africans working or studying in Britain. The new leadership attracted the support of workers, trade unionists, and a growing radical sector of the African student population. With fewer African American participants, delegates consisted mainly of an emerging crop of African intellectual and political leaders, who soon won fame, notoriety, and power in their various colonized countries.

The final declaration of the 1945 congress urged colonial and subject peoples of the world to unite and assert their rights to reject those seeking to control their destinies. Congress participants encouraged colonized Africans to elect their own governments, arguing that the gain of political power for colonial and subject peoples was a necessary prerequisite for complete social, economic, and political emancipation. This politically assertive stance was supported by a new generation of African American activists such as the actor and singer Paul Robeson, the minister and politician Adam Clayton Powell, Jr., and the educator and political activist William A. Hunton Jr. who took an increasing interest in Africa.

While the Pan-African congresses lacked financial and political power, they helped to increase international awareness of racism and colonialism and laid the foundation for the political independence of African nations. African leaders such as Kwame Nkrumah of Ghana, Nnamdi Azikiwe of Nigeria, and Jomo Kenyatta of Kenya were among several attendees of congresses who subsequently led their countries to political independence. In May 1963, the influence of these men helped galvanize the formation of the Organization of African Unity (OAU), an association of independent African states and nationalist groups.