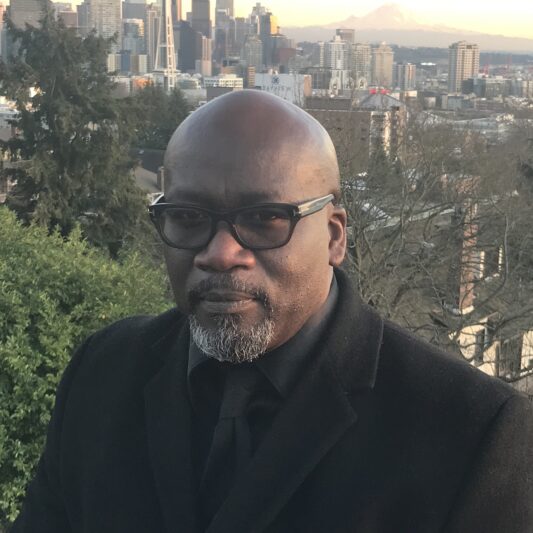 Saheed Yinka Adejumobi is Associate Professor in the History Department at Seattle University.  He also teaches for two additional programs at SU, African and African American Studies and Film Studies.

Dr. Adejumobi specializes in African and African American history, African diaspora intellectual and cultural traditions, and utopian studies across the Black diaspora within the framework of Atlantic modernity and Global South relations.

He is the author of The History of Ethiopia, a contribution to the Greenwood Press History of Modern Nation Series.  He has also contributed to several publications on African, African American and the Black diaspora history.

His work centers on concepts of heritage, history, and social relations as vital components of development.  He explores how these ideas have evolved over the past two centuries and how they are being manifested or manipulated in twenty-first century literary, film, visual and sonic arts, as well as in political and freedom movements.

Amha Selassie, the last emperor of Ethiopia, was proclaimed ruler of the state three times, first in 1960, then in 1975, and finally while in exile in 1989.  Selassie was born Asfaw Wossen Tafari in the walled city of Harrar in August 1916 to Dejazmach … END_OF_DOCUMENT_TOKEN_TO_BE_REPLACED

Haile Gebre Selassie is regarded by many observers as the greatest Ethiopian long-distance runner of all time. He was born in the province of Arsi in central Ethiopia and was inspired by runners Abebe Bikila and Miruts Yifter. As a child he was said to … END_OF_DOCUMENT_TOKEN_TO_BE_REPLACED

In the nearly half century between 1900 and 1945, various political leaders and intellectuals from Europe, North America, and Africa met six times to discuss colonial control of Africa and develop strategies for eventual African political liberation. In the article that follows, historian Saheed Adejumobi … END_OF_DOCUMENT_TOKEN_TO_BE_REPLACED

Eshetu Chole was Ethiopia’s leading economist prior to his death in 1998. His research and publications encompassed an extraordinary breadth: agriculture, industrial and social development, fiscal policy, macro- and microeconomics, and human development at national and regional levels. He was also a budding poet. Chole … END_OF_DOCUMENT_TOKEN_TO_BE_REPLACED

Berhanu Nega was elected mayor of Addis Ababa, Ethiopia in the Ethiopian general elections, 2005. He is a founding chairman of the Rainbow Ethiopia: Movement for Democracy and Social Justice and a Deputy Chairman of Coalition for Unity and Democracy (CUD), for which he served … END_OF_DOCUMENT_TOKEN_TO_BE_REPLACED

Born in Ethiopia in 1937, Alexander Skunder Boghossian first rose to prominence at the age of 17 when he won second prize for his painting at the Jubilee Anniversary Celebration of Ethiopia’s Emperor Haile Selassie I.  The following year he was awarded a scholarship to … END_OF_DOCUMENT_TOKEN_TO_BE_REPLACED

Mengistu Haile Mariam, a former Lieutenant Colonel in the Ethiopian Army, led a coup which ousted Emperor Haile Selassie from power in 1974.  Mengistu took control of the government and served as its Communist head of state in Ethiopia from 1977 to 1991. He formally … END_OF_DOCUMENT_TOKEN_TO_BE_REPLACED

John William Coltrane emerged as one of the most innovative and influential jazz musicians of the 20th century. Born in Hamlet, North Carolina on September 23, 1926, the son of John Robert and Alice Blair Coltrane, he grew up in High Point, North Carolina where … END_OF_DOCUMENT_TOKEN_TO_BE_REPLACED

Jazz pianist Thelonious Monk became one of the 20th Century’s most influential and innovative jazz musicians.  Born on October 10, 1917 in Rocky Mount, North Carolina, the son of Thelonious and Barbara Monk, young Thelonious Monk grew up in New York City after the family … END_OF_DOCUMENT_TOKEN_TO_BE_REPLACED

Ethiopianism is an Afro-Atlantic literary-religious tradition that emerged out of the shared political and religious experiences of Africans from British colonies during the late 18th and early 19th centuries.  Ethiopianism linked Africa historically to the ancient classical era, challenging the then prevailing idea that the … END_OF_DOCUMENT_TOKEN_TO_BE_REPLACED