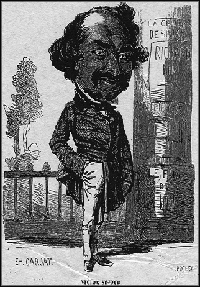 Victor Séjour was a playwright born in New Orleans, Louisiana on June 2, 1817. His parents were Louis Victor Séjour Marou, a free colored man from Saint-Domingue (Haiti), and Héloise Philippe Ferrand, a quadroon from New Orleans. Although Victor was born in 1817, and his older brother in 1811, his parents did not marry until 1825, thus legitimizing their two children as well as the daughter born the following year, 1826.

Victor’s father had previously served in D’Aquin’s Battalion of Free Men of Color during the defense of New Orleans in December of 1814 and January of 1815. By trade, however, Louis owned his own tailor shop on Chartres Street. His income was substantial enough to send Victor to be taught by Michel Seligny at his Saint-Barbre Academy in New Orleans.

In 1834, shortly after his 17th birthday, Victor Sejour journeyed to France where he began to write. His first short stories were published by Revue des Colonies in 1837. One of his stories centered on Georges, a mulatto youth who’s experiences are used to convey Sejour’s thoughts on the injustices of slavery and racism. This theme was initially not uncommon for Sejour but as he became more successful he would ignore it in favor of more French nationalist works as he became increasingly distant from his American origins, and more enamored of France.

Sejour’s themes included fidelity, familial and romantic love, the dignity of labor, the existence of God, and the value of courage in adversity.  Although Sejour’s plays were at first written in verse, he soon found prose to be a better vehicle for conveying his messages.  After 1852, he permanently relinquished verse. Sejour’s plays proved very popular among French audiences. Emperor Napoleon III saw Le Massacres de la Syrie and La Tireuse de Cartes in 1859.  On some occasions Sejour’s plays had theatrical runs of six months.

Despite many years of success, Sejour’s popularity began to wane in the 1860s in what would prove to be productive but largely unrecognized years.  In 1870 the critics’ response to his work had grown so weak that his play Henri de Lorraine was withdrawn from the printers. Sejour published his only novel in this period, Le Comte de Haag which was serialized in 1872.

The loss of popularity took a toll on Sejour’s energy and his health. Tuberculosis eventually brought him to the Municipal Hospital in Paris on September 11, 1874. Less than three weeks later, Victor Séjour passed away on September 20, 1874. He had become destitute; his medical fees were paid for by the Société des Auteurs et Compositeurs Dramatiques, and his body laid to rest in Père-Lachaise Cemetery outside Paris.