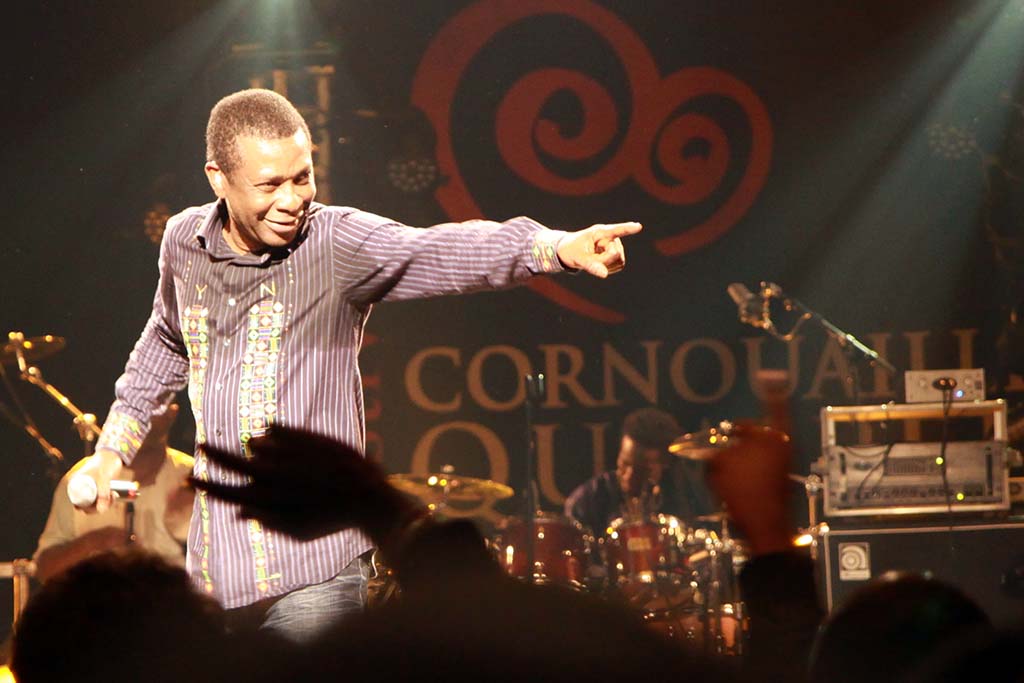 Youssou N’Dour, West African humanitarian, activist, and musician, often cited as father of modern Afro-pop, was born in 1959 in the Medina neighborhood of Dakar, the capitol of Senegal. His father, Elimane N’Dour, of the Serer ethnic group, supported his family as an auto mechanic. Youssou’s mother, Ndeye Sokhna Mboup, of Wolof heritage, came from a griot family. She is a griotte (a.k.a. gallo or jeli) and Youssou is likely to have been heavily influenced by his maternal lineage of praise singers.

At the age of 12, Youssou debuted as a griot singer at religious ceremonies, and dropped out of middle school. By 1979 he had formed his backup ensemble l’Etoile de Dakar which eventually morphed into The Super Etoile, with which he performed until becoming Senegal’s Minister of Tourism in 2012.  Youssou’s signature sound mixes traditional mbalax (language of the Serers), jazz, and hip-hop.

Introduced to the US and UK in 1986 by Peter Gabriel, he has gone on to produce over 51 releases as well as movies and countless appearances. As a debuting actor, Youssou played Olaudah Equiano in Amazing Grace, an award winning historical drama depicting the campaign for the abolition of slavery in Britain 200 years ago. In 2008, he starred in eight-time award-winning musical documentary Youssou N’Dour: What I Bring is Love, as well as the documentary, Return to Gorée.

A 1991 collaboration with Spike Lee‘s record label 40 Acres & A Mule produced the album Eyes Open, as well as a Grammy nomination. He did eventually win the Grammy for Best Contemporary World Music Album for the 2005 release Egypt.

Awards are also numerous, starting with the 2000 African Artist of the Century given by the UK publication Roots. He was listed in the Time 100 in 2007. Yale University awarded him an honorary Ph.D. in Music in 2011. August 2013 saw Youssou won Sweden’s Polar Music Prize, an award honoring those promoting understanding between faiths via music.

In early 2012, with the impending destabilization of Senegal’s political structures, he felt compelled to run for the presidential election. He failed to secure nomination by any of the major political parties but was invited to act as Senegal’s tourism minister by newly elected president Maky Sall.