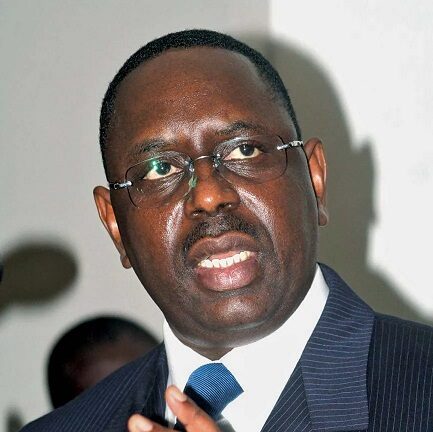 Macky Sall, the fourth and current president of Senegal, was born on December 1, 1961, in Fatick, Senegal to Amadou Abdoul Sall and his wife, Coumba Thimbo. Fatick is a town in central Senegal where most people speak Wolof or Serer but his parents are Fula people from the north of Senegal.

On April 21, 2004, Sall was appointed Prime Minister. He served in that position until mid-2007. In June 2007 he was elected President of the National Assembly. After a conflict with Senegalese President Abdoulaye Wade, Sall established a new political party, The Alliance for the Republic, on December 1, 2008.

In 2012 he campaigned for president and defeated his opponent, incumbent Abdoulaye Wade, on March 25, 2012. Sall is one of a handful of African opposition leaders to defeat an incumbent president. On February 24, 2019, he won re-election in the first round of voting having garnered 58% of the vote, and was sworn in for his second term on April 2, 2019.

Sall campaigned in both presidential contests for an “Emerging Senegal.” His administration has expanded the national infrastructure, including building a new airport and a planned city, Diamniadio Lake City, on the outskirts of Dakar, the capital. The government has also endorsed Akon City planned by Senegalese music star Akon. Sall has committed to increasing employment opportunities for Senegalese, specifically boys, girls, and women. His government is expanding housing and enforcing environmental protection laws. In 2016 Sall’s government reduced the presidential term from seven to five years with a two-term limit for the president.

Sall is multilingual being fluent in Wolof, Serer, Pulaar, French, and English. Macky Sall and his wife, Marieme Faye, are the parents of three children: Ndeye Driss, Amadu, and Ibrahima.