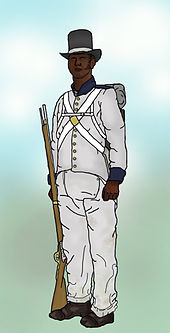 During the first two decades of the 19th Century, escaped American slaves formed a military cadre called Britain’s Royal Navy Corps of Colonial Marines.  After the War of 1812 these former soldiers established Trinidad’s “Merikin” communities.  These black marines in the British Navy were first organized in 1808 to garrison Britain’s Caribbean bases but they were disbanded in 1810.  During the War of 1812, British Rear Admiral Sir Alexander Cochrane formed the Corps of Colonial Marines.  Although they were of African descent and many were formerly enslaved, these troops received the same training, uniforms, pay, and pensions as their Royal Marine counterparts.

The Corps of Colonial Marines saw extensive military action from Canada to Georgia in the years 1814 to 1816.  These former slaves often had extensive local knowledge of tidal creeks and riverine routes of the US South during that period.  Because of that knowledge they participated in numerous battles, skirmishes, and raids during the War of 1812.  They supported the British forces who burned Washington, D.C. in 1814 and who were later repulsed by US troops at Baltimore, Maryland. The Colonial Marines assisted Britain’s Southern Coastal Campaign by guarding the British Army’s right flank during the invasion and subsequent Battle of New Orleans in 1815.  When the 1814 Treaty of Ghent ended the War of 1812, the Corps of Colonial Marines was transferred to British bases in Bermuda.

The role of the Colonial Marines at Prospect Bluff, Florida in 1816 typified their use after the War of 1812.  The Marines were ordered to defend a nominally Spanish-fortified stockade at Prospect Bluff that was now the target of U.S. forces.  The stockade, overlooking the fertile Apalachicola river valley, was at the center of a web of river and road transportation and communications routes extending into Georgia and Alabama Territory.  The fort had previously been under the protective umbrella of the Colony of Spanish Florida and had over time become such a prominent sanctuary for escaped slaves that it was called Negro Fort.  Now however it was guarded by the Corps of Colonial Marines.

Major General Andrew Jackson, projecting American power into the Florida panhandle, attempted to capture the stockade.  In July 1816, Jackson led a riverine flotilla of US gunboats toward the fort.  American forces overran the stockade, which was defended primarily by the Colonial Marines, but with Spanish and Seminole allies.  When a lucky artillery shot hit the fort’s powder magazine, it exploded, forcing the British to surrender.  After the surrender, many of the survivors were enslaved by American forces.  Other Colonial Marines were withdrawn, demobilized, and settled in the British colony of Trinidad in the West Indies.  The Corps of Colonial Marines never again took to the field of battle.  Negro Fort today is a US National Landmark known as Fort Gadsden.