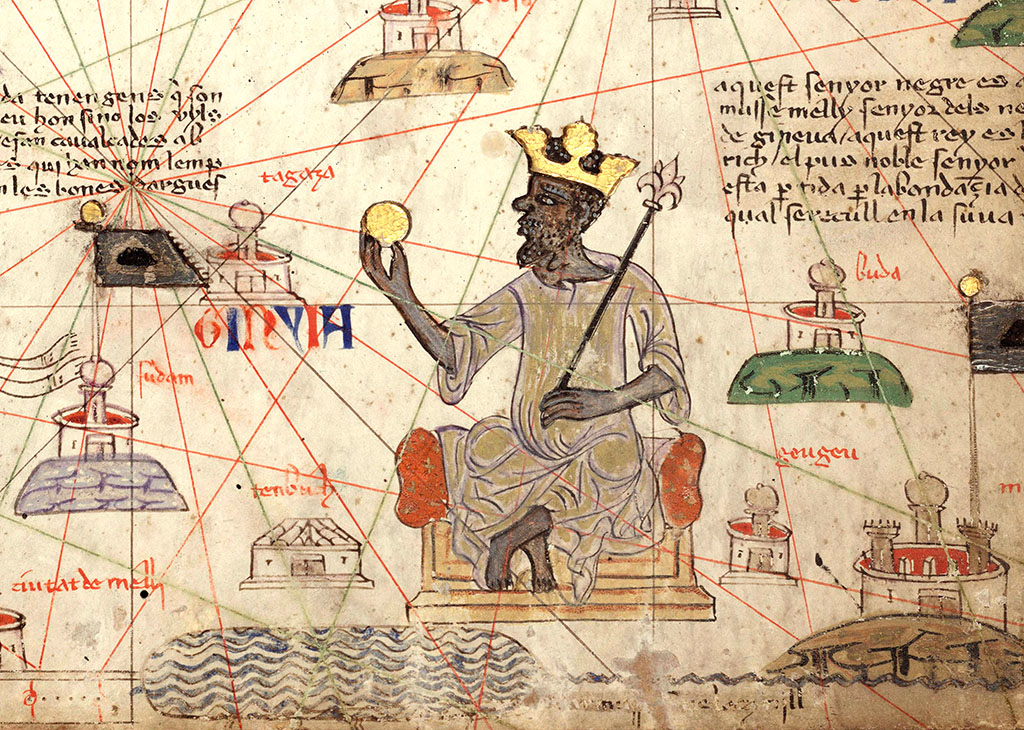 Mansa Musa, fourteenth century emperor of the Mali Empire, is the medieval African ruler most known to the world outside Africa. His elaborate pilgrimage to the Muslim holy city of Mecca in 1324 introduced him to rulers in the Middle East and in Europe. His leadership of Mali, a state which stretched across two thousand miles from the Atlantic Ocean to Lake Chad and which included all or parts of the modern nations of Mauritania, Senegal, Gambia, Guinea, Burkina Faso, Mali, Niger, Nigeria, and Chad, ensured decades of peace and prosperity in Western Africa.

In 1312 Musa became emperor following the death of his predecessor, Abu-Bakr II. When he was crowned, he was given the name Mansa meaning king. Mansa Musa was knowledgeable in Arabic and was described as a Muslim traditionalist. He became the first Muslim ruler in West Africa to make the nearly four thousand mile journey to Mecca. Preparing for the expedition took years and involved the work of artisans in numerous towns and cities across Mali. In 1324 Musa began his pilgrimage with a entourage of thousands of escorts. He also brought considerable amounts of gold, some of which was distributed along the journey.

Accompanied by thousands of richly dressed servants and supporters Musa made generous donations to the poor and to charitable organizations as well as the rulers of the lands his entourage crossed. On his stop in Cairo, Egypt, the Emperor gave out so much gold that he generated a brief decline in its value. Cairo’s gold market recovered over a decade later.

Upon his return from Mecca, Mansa Musa brought Arab scholars, government bureaucrats, and architects. Among those who returned with him was the architect Ishaq El Teudjin who introduced advanced building techniques to Mali. He designed numerous buildings for the Emperor including a new palace named Madagou, the mosque at Gao, the second largest city in Mali, and the still-standing great mosque at Timbuktu, the largest city in the empire. That mosque was named the Djinguereber. El Teudjin’s most famous design was the Emperor’s chamber at the Malian capital of Niani.

Mansa Musa’s pilgrimage boosted Islamic education in Mali by adding mosques, libraries, and universities. The awareness of Musa by other Islamic leaders brought increased commerce and scholars, poets, and artisans, making Timbuktu one of the leading cities in the Islamic world during the time when the most advanced nations from Spain to central India were Muslim. Timbuktu was clearly the center of Islamic Sub-Saharan Africa.

Musa’s pilgrimage to Mecca brought Mali to the attention of Europe. For the next two centuries Italian, German, and Spanish cartographers produced maps of the world which showed Mali and which often referenced Mansa Musa. The first of these maps appeared in Italy in 1339 with Mansa Musa’s name and likeness.

Mansa Musa died in 1337 after a twenty-five year reign. He was succeeded by his son, Maghan I.