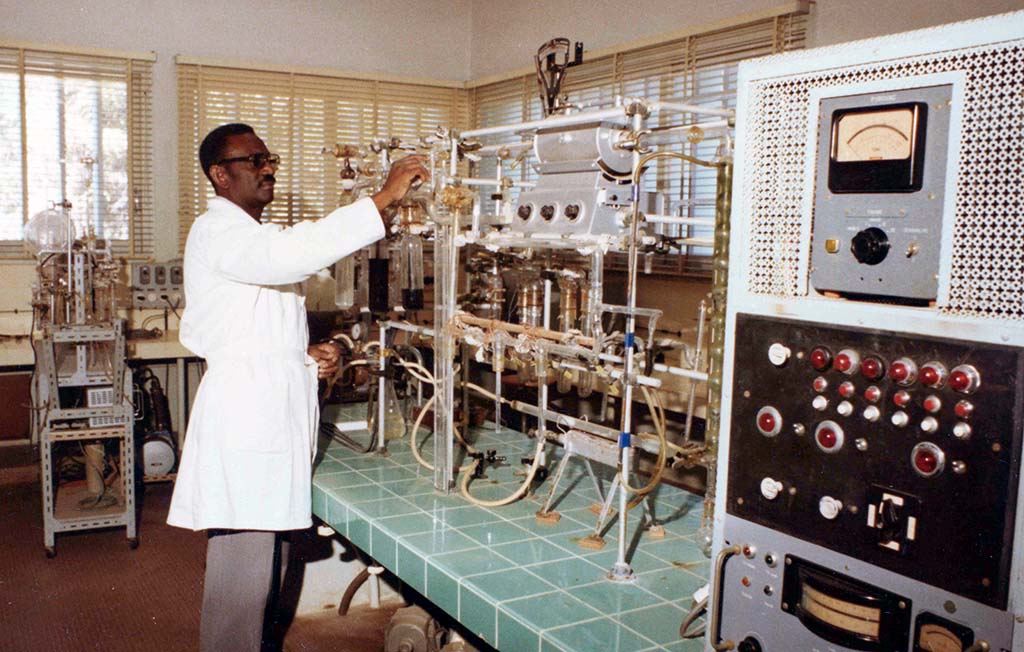 Distinguished historian and Pan-Africanist political leader, Cheikh Anta Diop was born in Diourbel, Senegal on December 23, 1933 to a Muslim Wolof family. Part of the peasant class, his family belonged to the African Mouride Islamic sect. Diop grew up in both Koranic and French colonial schools. Upon completing his bachelor’s degree in Senegal, Diop moved to Paris, where he began his graduate studies at the Sorbonne in 1946 in physics.

Once at the Sorbonne, however, Diop became involved in the African students’ anticolonial movement, where young intellectuals worked for African independence. He helped organize the first Pan-African Student Congress in Paris in 1951 and in 1956 participated in the First World Congress of Black Writers and Artists in Paris. These movements laid the groundwork for a growing African liberation sentiment, supported by the ideological arguments of Negritude, Marxism, and Pan-Africanism.

Committed to the richness of African history, Diop’s 1951 Ph.D. dissertation looked into ancient Egyptian history and the influence it had on European culture. At a time when European cultural superiority was the accepted notion, Diop proclaimed that African civilizations were the inspiration and origin of European accomplishments. The Sorbonne rejected his dissertation, yet his work nevertheless received worldwide attention. In 1955 his work was published as Nations negres et culture (Negro Nations and Culture), a publication that would make him one of the most widely known and controversial historians of his era.  Partly due to the response to the book, in 1960 Diop was awarded his doctorate by the Sorbonne. That same year, Senegal gained its independence and Diop returned to his home country.

In Senegal, Diop was appointed a research fellow at Institut Fondamental d’Afrique Noire (IFAN) at Dakar University, where he set up a radiocarbon dating laboratory. In 1961 and 1963, he created political opposition parties: Bloc des Masses Sénégalaises and the Front National du Sénégal. These parties opposed the pro-French policies of President Leopold Senghor’s government. The Bloc des Masses was banned in 1963. In response to the dissolution of these parties, Diop founded the Rassemblement National Democratique (RND) in 1976. The RND published the Wolof-language journal, Siggi, of which Diop was the editor.

As a renowned scholar and political activist, Diop was appointed professor of ancient history at Dakar University in 1980.  Over his career Diop published a number of books including seven which were translated into English.  His most famous works were The African Origin of Civilization: Myth or Reality (1974); The Cultural Unity of Black Africa (1978), and Towards the African Renaissance: Essays in African Culture and Development, 1946-1960 (1978). Diop received the highest award for scientific research from the Institut Cultural Africain in 1982. As a testament to his global effect, Diop was invited to Atlanta, Georgia in 1985, where Mayor Andrew Young proclaimed April 4th “Dr. Cheikh Anta Diop Day.” The many books Diop published in French were all dedicated to African self-empowerment and the reconstruction of a colonially-fragmented identity. Diop had two sons with his wife, Louise Marie Diop Maes.