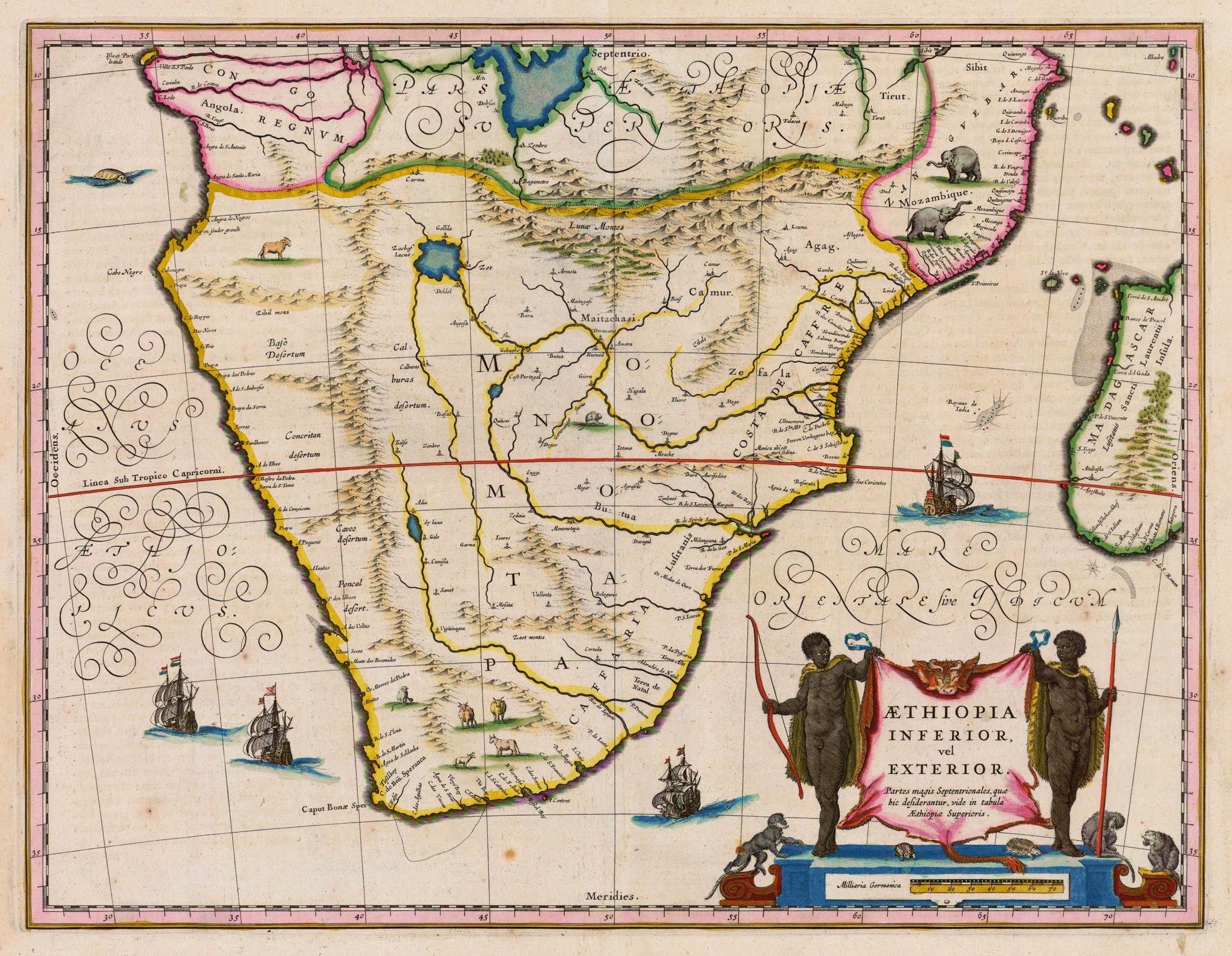 When Great Zimbabwe began its economic and military decline in the late 1400s, some of the city’s elites migrated 200 miles north to the Zambezi River and established the short-lived Shona state of Monomotapa (Mutapa). The state emerged around 1500 under Nyatsimba Mutota, the first mwene (king) who gained control of the surrounding gold producing region and much of the Zambezi River Valley.  Mutota established a new capital at Zvongombe, near the Zambezi River.

At the height of its power under Mutota’s son Mwene Matope, Monomutapa included the entire Zambezi River Valley (modern day Angola, Zambia, Tanzania, and Zimbabwe) from Zumbo in what is now North Central Mozambique to the Indian Ocean. Matope’s title, mwenemutapa, means literally the “lord of the plundered lands.”  His regal costume included an exquisitely decorated small hoe as part of the belt.  The hoe had an ivory handle and suggested peace through the ability to gain wealth from the earth.  Other symbols of the kingship included granaries, animal horns, and spears or weapons. The monarchy also relied on the principle of divine kingship.  The Mwene Matope was believed to be the “God of the sun, and the moon, king of the land and the rivers and conqueror of enemies.”

Growing wealthy through a system of vassalage (taxation), Mwene Matope also controlled long distance trade with special state-sponsored markets called feiras. Excavations have revealed feiras at towns along the Zambezi River including Luanze, Dambarare and Masappa.  These excavations show tools such as iron tongs and fine goods such as Chinese white and blue porcelain and glass beads from India, indicating that Monomutapa continued to participate in the Trans-Indian Ocean trade that had helped establish Great Zimbabwe.

By the 1590s, Monomutapa had begun a cultural, political and military decline intensified by increasingly frequent civil wars.  The fragmented central government allowed provincial governors to gain more power.  The political leaders of one province, Changamire, broke free and began building a successor state to Monomutapa.  Additionally, the Portuguese colony along the coast gained more power at the expense of Monomutapa.  By the 1630s, the Portuguese overran all of Monomutapa and appointed a new mwene, Mavura Mhande Felipe, to the throne in 1629.  From that point, Monomutapa survived by exploiting the rivalries between other African states and the Portuguese.  The last mwene, Mambo Chioko, was killed in battle against the Portuguese in 1917.