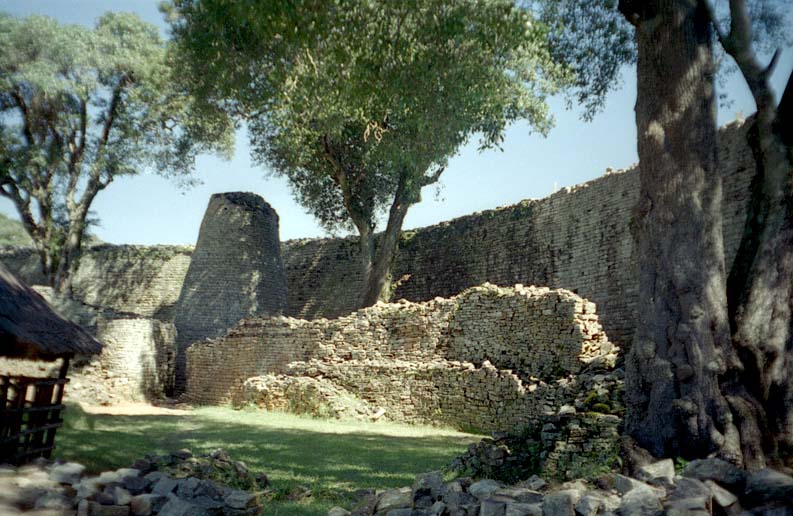 The city of Great Zimbabwe existed in the Sub-Saharan region of Africa from the 11th century to the mid-16th century.  The city grew from a community of farmers and cattle herders to a major economic center, deriving power and wealth from its proximity to resources of gold and the trading routes along the Indian Ocean. Great Zimbabwe reached its peak with 18,000 residents by the mid-14th century.

The ruins of Great Zimbabwe, some 300 structures, cover more than sixty acres and includes three main areas: the Hill Complex, the Great Enclosure and the Valley Ruins.  The Hill Complex is the oldest part of the city with pottery and burials dating to the 6th century.  A monumental wall composed of local granite, 37 feet in height and 328 feet in length, surrounded the complex and testifies to the military and political importance of the city.

The Great Enclosure, also known as the Mumbahuru (“the house of the great woman”) housed the wives of the rulers and was a ceremonial site with a monumental wall composed of about one million blocks. Most people of Zimbabwe however lived in daga huts of mud and gravel surrounding the complex.

Among the Zimbabwe ruins, archaeologists discovered local and imported pottery including Chinese celadon wares, glass beads from India, Persian faience, and birds and bowls of soapstone. Flecks of discarded soapstone suggest that the soapstone works reflect the work of local craftsmen.  The Chinese and Persian artifacts indicate that Great Zimbabwe was part of an Indian Ocean trading network even though the complex itself is 300 miles from that ocean.

At its peak in the 13th and 14th century, Great Zimbabwe thrived on cattle herding, gold mining and commerce with the Swahili port city of Sofala on the Indian Ocean.  It produced cotton and pottery.  Because of its strategic location near these resources and trade opportunities, Great Zimbabwe grew larger than any surrounding town and became the capital city of the Karanga (Shona) nation.

Great Zimbabwe declined in power in the early 15th Century.  The nearby tributaries of the Zambezi and Limpopo rivers no longer produced gold flakes and nuggets, which had fueled the economy.  The exhausted farmland surrounding the city could no longer support the number of residents. Eventually the trade routes in the interior between the Zambezi valley and the ports on the Indian Ocean changed, costing Great Zimbabwe its control over regional commerce.  Great Zimbabwe was named a UNESCO World Heritage Site in 1986.