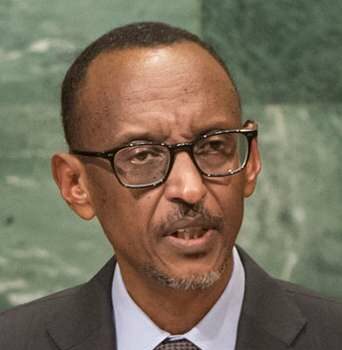 Paul Kagame, the current President of Rwanda, was born in Gitarama, central Rwanda, on October 23, 1957, into a Tutsi family. In 1959 when the massacres of Tutsis by Hutus began, Paul Kagame’s family fled to Uganda along with thousands of Tutsis, to save their lives. He grew up in Gahunge, Uganda before going to study between 1972 and 1976 in Kampala.

In 1979, at the age of twenty-two, Kagame joined the National Resistance Army (NRA), led by Yoweri Museveni, which was a militia supported by the U.S. and fighting the Ugandan dictator Idi Amin Dada.  In 1986, the NRA overthrew Amin and Museveni became President. He appointed Kagame Staff Chief of the Army deputy director of the Defense Intelligence of Uganda.

In 1990, after he attended a U.S. military training camp in Fort Leavenworth, Kansas, Kagame began his rise to power in his native Rwanda. On October 1, 1990, the Front Patriotique Rwandais (FPR), composed mainly of exiled Tutsis, and created in the 1980s, began attacking Rwandan border towns.  On October 2, the FPR leader Fred Rwigema died in battle and President Museveni imposed Kagame as the new FPR leader.

Between 1991 and 1993, Kagame led the FRP in negotiations at Arusha, Tanzania to stop the Rwandan civil war.  In 1994, however, after the death of the Rwandan President Juvénal Habyarimana in a plane crash, a genocide began in Rwanda directed against the Tutsi and led by the Hutu-dominated Rwandan government.  An estimated one million people were killed during the genocide.  Kagame’s FRP, however with the support of Uganda and other African nations, managed to defeat the Rwandan Army even though the FRP was outnumbered four to one.

The FRP gained control of the Rwandan government, effectively ending the genocide in mid-July, 1994, four months after it began.  A new government of national unity to control the country with Pasteur Bizimunga as President, Faustin Twagiramunga as Prime Minister, and 37-year-old Kagame as Vice-President and Head of Homeland Security.

Kagame led the reconstruction of the country throughout the late 1990s, by eliminating from the government all of the leaders of the genocide and promoting gender equality in politics. He also led Rwandan efforts to help Congolese resistance forces in their struggle against Zairian dictator Mobutu Sese Seko, eventually driving him from office.

On April 17, 2000, Kagame was elected President of Rwanda by the Parliament and reelected by Direct Universal Suffrage in 2003 with 95% of the votes. He continued to pursue his post-genocide reconstruction policy by banning ethnic references in the constitution and official laws of the nation.

Reelected in 2010 with 93% of the votes, Kagame’s decade in office was often presented as a model for other African countries to follow.  His administration obtained impressive economic results and brought stability to a country that had known decades of civil war and the horror of the genocide only a few years before. This period has often been described as the “Rwandan Miracle” and in 2010, Kagame received the “Global Citizen Award” from the Bill and Hillary Clinton Foundation for his work in Rwanda.

Nonetheless, in recent years critics have noted that Kagame is increasingly an autocratic and repressive leader.  They cite his repression of the press and the many unexplained murders of political opponents. In 2015, Kagame changed the constitution to be able to run for a third term. He was elected in 2017 with 98.8% of the votes.