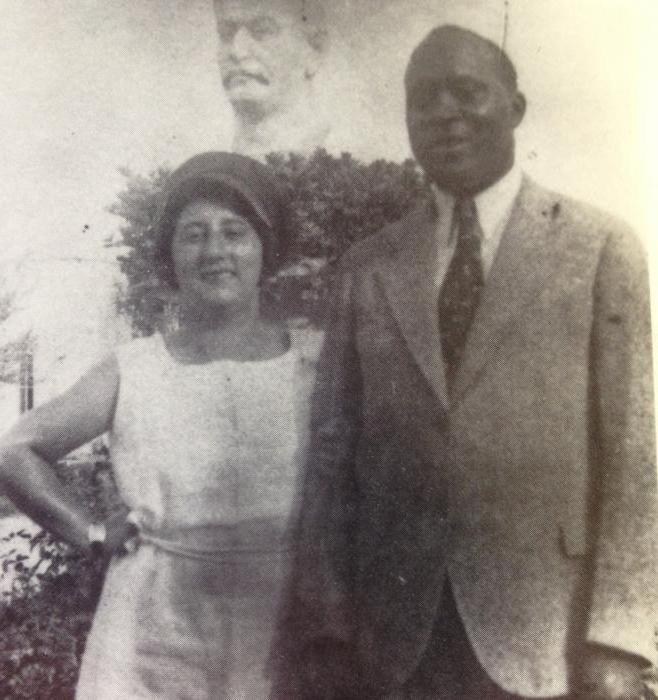 Oliver Golden, born in 1887, in Yazoo County, Mississippi, was the son of former slaves who prospered during Reconstruction. Their house, however, was burned twice by Ku Klux Klan which resented the family’s success and they were forced to leave Mississippi for Alabama while Oliver was a student at Tuskegee Institute (now Tuskegee University). One of Golden’s professors at Tuskegee was George Washington Carver with whom he kept in contact with throughout his life.

Golden did not graduate Tuskegee University because he was drafted into the U.S. Army to fight in France during World War I. After the war he worked as a waiter in a railroad dining car in Chicago, Illinois and in the early 1920s joined the Chicago labor movement and later the U.S. Communist Party.

Oliver was fascinated with the anti-racist ideology of Communism and he decided to come to the Soviet Russia in 1924 by an invitation from a friend who held a high post in Comintern, the international organization that promoted world communism). Oliver arrived in Russia with his first wife Jane Wilson, but she fell ill and died the same year. Oliver fell into a depression but was nursed back to health by a Soviet Asian woman, Anya, with whom he fell in love. The couple never married but they had a child, Ollava Golden.

Oliver enrolled in the prestigious Communist University for Oriental Workers in Moscow which recruited revolutionaries from Asia and Africa. Oliver received his degree in early 1928 and returned to the United States where he worked for the American Communist Party. He met his second wife Bertha Bialek in prison after both of them were arrested at a political demonstration. Bertha Bialek was born in Poland to a Jewish family and moved to the United States with her parents. Both the African American and Jewish communities were opposed to interracial marriage but Bertha and Oliver decided to get married to challenge this belief.

In 1931, Oliver left United States with fourteen other African American cotton specialists from various universities and his wife, Bertha Bialek. They were invited by the Soviet government to serve as experts in the cultivation of cotton. They choose to come to Uzbekistan because it was a cotton-growing region and because it was the Soviet Republic of “national minorities” because Uzbeks had faced discrimination in Tsarist Russia because of their skin color.

After settling in the Yangiyul village near Tashkent, Golden gave lectures on cotton cultivation and helped develop a type of hybrid cotton that would be grown there.  He moved to Tashkent and was elected to the city council. Local authorities issued him permission to carry a personal revolver which was an indication of his status at that time.

When the Soviet contract for the agronomists ended in 1934, most of Oliver’s group returned to the United States. Oliver and Bertha Golden, however, decided to remain and accept Soviet citizenship. Later in his life, Oliver was active in Soviet efforts to promote the Scottsboro Boys and he taught classes at the Institute of Reclamation while his wife, Bertha, taught English classes in the Institute of Foreign Languages. Oliver Golden died in 1940 of a heart failure in Tashkent.  He was 53.