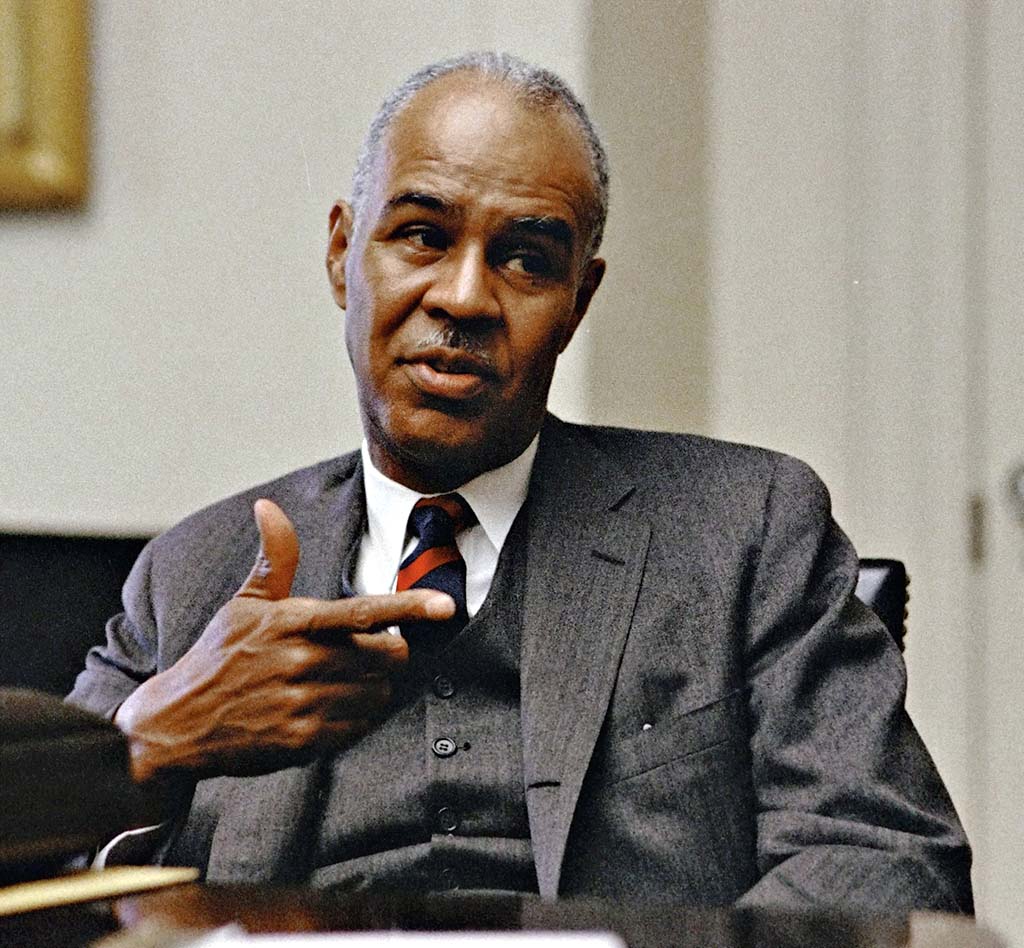 Roy Wilkins, one of the leading US civil rights activists of the twentieth century, was born in St. Louis, Missouri.

Wilkins’ mother died of tuberculosis when he was four; he and his siblings were then raised by an aunt and uncle in a poor but racially integrated neighborhood in St. Paul, Minnesota.

Wilkins enrolled in the University of Minnesota in 1919 and—despite working full-time—graduated with a degree in sociology in 1923. He then became editor of the small African American newspaper the St. Paul Appeal. By the late 1920s, Wilkins became managing editor of the Kansas City Call, one of the larger Midwest black newspapers. In 1929 he married social worker Aminda ‘Minnie’ Badeau; the couple had no children.

Although a journalist during the 1920s, Wilkins was hired in 1934 by Walter White as the assistant secretary of the National Association for the Advancement of Colored People (NAACP). He served in that post until 1934 when he was named editor of the NAACP’s official journal Crisis, succeeding W.E.B. DuBois, who abruptly resigned from the Association because of a policy dispute. From 1949 to 1950 Wilkins led the National Emergency Civil Rights Mobilization, a coalition of more than 100 local and national groups. In 1950, A. Philip Randolph of the Brotherhood of Sleeping Car Porters and Arnold Aronson of the National Jewish Community Relations Advisory Council founded the Leadership Conference on Civil Rights (LCCR), which served for the next two decades as the major Washington D.C. lobby for civil rights legislation.

In 1955, Wilkins became executive secretary of the Association following the death of Walter F. White, and in 1964 became its executive director. As leader of the oldest and largest civil rights organization in the nation, Wilkins soon became a key figure in the national protests that became known as the Civil Rights Movement of the 1960s. As a popular and eloquent voice for that movement, Wilkins directed the NAACP’s fight against de jure and de facto segregation and racial inequality. He played a key role in organizing the 1963 March on Washington which led to the 1964 Civil Rights Act and the Selma to Montgomery March in Alabama which produced the 1965 Voting Rights Act. He also participated in the 1966 March Against Fear in Mississippi following the attempted assassination of James Meredith.

Throughout this period Wilkins was a staunch advocate of legislative reform and nonviolence and consulted with Presidents Kennedy, Johnson, Nixon, Ford and Carter on civil rights issues. In 1967, he was awarded the Presidential Medal of Freedom by President Lyndon Johnson.

Wilkins fiercely opposed the post-1966 militancy of the Student Non-Violent Coordinating Committee and more generally the Black Power Movement. Although Wilkins and Dr. Martin Luther King were often allies during the civil rights era, they were sharply divided over King’s criticism of the Vietnam War.

In 1977 Wilkins retired as executive Director of the NAACP and was succeeded by Dr. Benjamin Hooks. Later that year he was honored by the Association with the title of Director Emeritus.