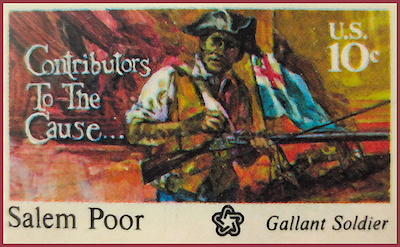 Salem Poor was a Patriot of the American Revolutionary War, credited primarily for his participation at the Battle of Breed’s Hill now popularly known as The Battle of Bunker Hill on June 17, 1775.  This battle is considered the first major conflict between Patriot forces and the British Army.  Poor, was one of a number of free and enslaved African Americans who participated in the battle including Caesar Brown, Prince Estabrook, Grant Cooper, George Middleton, and Peter Salem, with whom he was often confused in early historical accounts of the battle.

Poor was born into slavery in Andover, Massachusetts on a farm owned by John and Rebecca Poor.  He spent his early years in servitude to the family, and in 1769, at the age of 22, he purchased his freedom for 27 pounds, the equivalent of the one year’s salary at that time, and about $5,600 today. Poor married Nancy Parker in 1771, a free mulatto woman with both Native American and African American ancestry.  Parker was a maid servant to Captain James Parker. Salem and Nancy had a son, Jonas, who was baptized in September of 1776.

In 1775, Poor enlisted in the Army with Captain James Frye’s regiment of Massachusetts Minutemen. On June 16, 1775 Captain Frye’s regiment along with two others, totaling about 850 men, were ordered to march from Cambridge, Massachusetts to Charleston, Massachusetts, and establish at the top of a hill outside Charleston.  The British were aware of the Colonial presence and after three separate attacks took over the fort, but with significant casualties. It is in this battle that Poor gained his notoriety. In John Trumbull’s famous painting “Battle at Bunker’s Hill,” British General Joseph Warren has been fatally wounded and British Lieutenant Colonel James Abercrombie is lying dead at his feet. Poor is credited with killing Colonel Abercrombie as well as numerous British soldiers.

In December of 1775,  Minutemen officers, including a Colonel, wrote a petition, citing Poor’s heroism explaining that “…we declare that a Negro man called Salem Poor of Col. Frye’s Regiment, Capt. Ames Company in the late Battle of Charleston, behaved like an experienced officer, as well as an excellent officer, to set forth particulars of his conduct would be tedious. We would only beg leave to say in the person of this Negro centers a brave & gallant Soldier.” Poor’s service record shows he reenlisted several times, and was involved in battles at Saratoga (New York), Monmouth (New Jersey), and Valley Forge (Pennsylvania) before being discharged in March of 1780.

Later in 1780 Poor married his second wife, Mary Twing. The couple moved to Providence, Rhode Island, but records state they were “ordered to leave town.” Poor placed an ad in the Boston Gazette in 1785 “disavowing his wife’s debts and forewarned all persons from trusting Mary….” He married a third time to a white woman named Sarah Stevens in 1787 but it is unclear what happened to the marriage.

In 1793 Poor turned up in the Boston Almshouse which by today’s standards would be a homeless shelter. He was jailed briefly in 1799 for “breach of peace” and married a fourth time to an unknown woman in 1801.  Salem Poor died in 1802 at the age of 55 and was interred at Copps Hill Burial Ground near Boston, Massachusetts. On March 25, 1975, “Salem Poor- Gallant Soldier” was honored with his image on a ten cent postage stamp, as part of the Postal Service Revolutionary War Bicentennial Series of stamps entitled “Contributors to the Cause.”