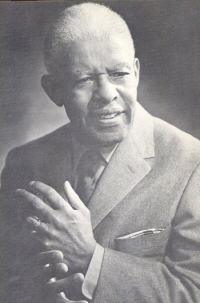 The son of former slaves, Roland W. Hayes, born June 3, 1887 in Curryville, Georgia, became the first African American male to become an internationally acclaimed concert vocalist.  As a youth, he sang in his Baptist church and on street corners for tips before attending Fisk University in Nashville, Tennessee where he performed and toured with the famed Fisk Jubilee Singers, an experience that eventually landed him in Boston.  Working odd jobs, by 1915 Hayes had saved up enough money to rent Boston’s Symphony Hall and give his first recital to an audience stunned by his masterfully executed selection of Negro spirituals, lieder and arias by Schubert, Tchaikovsky, and Mozart.  Continuing to act as his own promoter and manager, Hayes next toured the United States and England where in 1920 he performed for King George V and Queen Mary and studied lieder with Sir George Henschel.

Returning to the United States in 1922, Hayes was flattered by glowing reviews following concerts in Boston, Philadelphia, Detroit, and at New York City’s Carnegie Hall.  He took additional voice lessons and there were several more tours of Europe, including a stop in the Soviet Union and a command performance for Queen Mother Maria Christina of Spain.  A rather brutal racial incident in 1942 in Rome, Georgia involving Hayes and his family persuaded him to leave his home in the segregated South.

He published My Song in 1948, a collection of African American religious folk songs. Among his recognitions were the Spingarn Medal presented to him by the National Association of Colored People (NAACP)  in 1924, eight honorary academic degrees, and induction into the Georgia Music Hall of Fame in 1991.  In 1950, Hayes commenced a four-year stint teaching voice at Boston University, and in 1962, at age 75, he gave his farewell concert at Carnegie Hall.  Hayes died in Boston on December 31, 1976.  The Roland W. Hayes Museum in Calhoun, Georgia opened its doors in the year 2000.