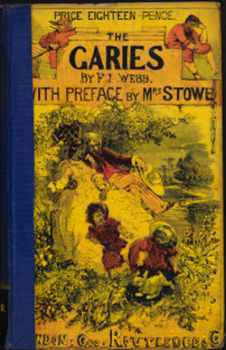 Little is known of Frank J. Webb’s education other than what can be deduced from his later creative output.  In 1845, at the age of seventeen, he married Mary, rumored to be the daughter of Spanish General Baldomero Espartero, and an African-born fugitive slave.  From 1850 until 1854 Webb worked as a commercial artist and designer in Philadelphia.  In 1854, he gave a lecture “The Martial Capacity of Blacks” to members of the Banneker Institute.  That same year he published his emigrationist views in a colonization paper in Norristown, near Philadelphia.  By the 1850s Webb associated with other abolitionists including William Cooper Nell, Robert Morris, Charles Sumner, and Frederick Douglass.

Mary E. Webb, meanwhile, established herself as a dramatic reader.  She performed Longfellow’s Hiawatha and Harriet Beecher Stowe’s The Christian Slave during her 1855-56 American reading tour.  Frank Webb not only managed Mary’s career and organized her tours, but also participated in at least one of her performances, “The Linford Studio.”

Frank Webb began his anti-racist novel The Garies and Their Friends in the mid-1850s The Webbs lived in London for about eighteen months from 1856 through 1857 and moved easily in aristocratic circles.  Webb’s novel was published in London by George Routledge in the fall of 1857 and was well received.  The couple spent several months in the winter of 1857-58 in Cannes on the French Mediterranean because of Mary’s declining health before moving to Kingston, Jamaica, where Frank had been appointed by the British Colonial Office as the city’s Postmaster.  Mary’s health did not improve in the warmer climate and she died the following year.

Webb lived in Jamaica for eleven years.  He became a planter and married Mary Rosabelle Rodgers.  With the exception of a year (1870) in Washington, D.C., clerking in the Freedmen’s Bureau and contributing to Frederick Douglass’s New Era, Webb spent the last twenty-three years of his life in Texas, working first as a newspaper editor, then as a postal clerk, and finally for thirteen years as principal of the Barnes Institute, a school for colored children in Galveston.