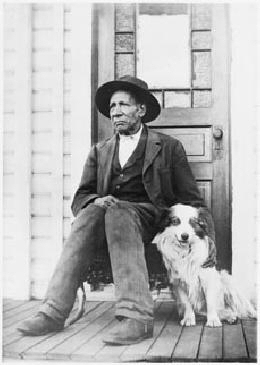 George Washington was a prominent pioneer in the state named, like he was, for America’s first president.  He founded Centralia in southwest Washington and was a leading citizen and benefactor of the town.  Washington’s father was a slave, his mother of English descent.  When his father was sold soon after his birth in Virginia, his mother left him with a white couple named Anna and James Cochrane (or Cochran), who raised him in Ohio and Missouri.  At the age of 33, Washington joined a wagon train and headed west with the Cochranes, seeking to escape discriminatory laws.

In 1852 he staked a claim on the Chehalis River in what was then Oregon Territory. Because Oregon law prohibited settlement by African Americans, Washington had the Cochranes file the claim. After Washington Territory was created, they deeded the property to him.

When he was in his fifties, Washington married widow Mary Jane Cooness (or Cornie).  In January 1875, the Washingtons platted a town, which they called Centerville, on their property.  The name was changed to Centralia in 1883.  The Washingtons provided land for a Baptist church, cemetery, and public square (now George Washington Park).

Washington’s wife died in 1888, but he continued to play a leading role in the growing town.  In the depression following the Panic of 1893, Washington helped keep Centralia afloat.  He distributed food to those in need, lent money without interest, and did not foreclose mortgages he held.  Washington remained active in civic affairs until shortly before his death at age 88.