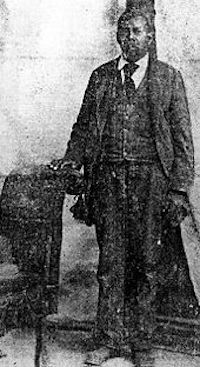 Born enslaved on January 6, 1828, on the Jordan Flake Plantation in Anson County, North Carolina, Green Flake was given to his owner’s son, James Madison Flake, when he married Agnes Love in 1838.  Later, the couple moved to Mississippi with their three-year-old son, Green, and other slaves.  In 1844, the Flake family joined the Church of Jesus Christ of Latter-day Saints (LDS) after being converted by missionary Benjamin Clapp.  Green and the other slaves were baptized by Elder Clapp on April 5, 1844.

Shortly afterwards, the James Flake family made the decision to leave Mississippi to participate in the largest religious migration in American history, the gathering of LDS members from across the United States to what is now Utah. They migrated first to Nauvoo, Illinois, where the church accepted Green’s labor as part of the Flake family tithing.

Green Flake, who weighed nearly two hundred pounds at the age of sixteen, was chosen as one of three “colored servants” (Oscar Cosby and Hark Lay were the others) in the vanguard LDS pioneer company of 143 men, 3 women, and 2 children who made the journey from Winter Quarters, Nebraska to Utah in 1847. When the western trek began on April 17, Brigham Young, president of the LDS Church, assigned Flake to be a member of the fourteen-member advance party.  Flake was also Young’s personal driver on the journey. When Young became ill in early July, Orson Pratt was assigned to lead the advance party to find the trail to the Salt Lake Valley.  Green was with Pratt and on July 22 rode in the first wagon that entered the valley.

Upon settling in Utah Territory, Green built a log cabin in what is now the Cottonwood area and planted crops in anticipation of his owner’s arrival.  When James and Agnes Flake arrived in 1848, Green Flake greeted them.  Around 1850, Green married Martha Crosby, who also a slave of Mormon pioneers and half-sister of Hark Lay. The couple had two children, Lucinda, born in 1854, and Abe, born in 1857.  When the widowed Agnes Flake moved to San Bernardino, California in 1854, Green Flake remained behind and was freed by Brigham Young later that year. The entire Flake family were listed as free residents of Union County, Utah Territory according to the 1860 U.S. Census.

When Martha Crosby Flake died in 1885, Green moved to Grays Lake, Idaho Territory to be close to his children and grandchildren. By the 1890s, he had achieved some fame as a vanguard LDS pioneer.  Flake spoke at Pioneer Day celebrations in 1894 and 1896, and in 1897 at the Utah Semi-Centennial Pioneer Jubilee, he was presented a Jubilee pin.  Green Flake died in Gray’s Lake, Idaho on October 20, 1903 at the ag of 75. He was buried next to his wife in Union Cemetery in Salt Lake City.