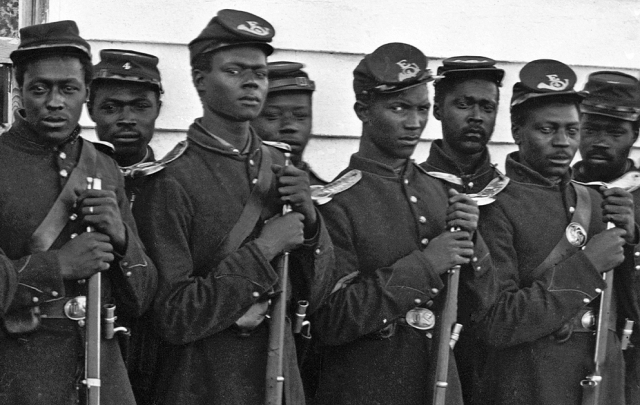 The United States Colored Troops (USCT) was the designation given to the approximately 175 regiments of non-white soldiers that served during the Civil War. The troops were primarily African American, but Native Americans, Asian Americans, and Pacific Islanders were all included within the ranks, as well. By the end of the war, nearly a tenth of the entire Union Army consisted of members of the USCT, which peaked at 178,000 individuals. These regiments were the precursors for the now-famous Buffalo Soldiers who served throughout the West following the conclusion of the war.

Before January 1, 1863, when the Emancipation Proclamation went into effect, President Abraham Lincoln was cautious about the recruitment of African Americans into the Union Army, due to politics and prejudice throughout the North, especially among Democrats loyal to the Union who resided in Border States that allowed slavery. Once January 1 came, however, and the Emancipation Proclamation went into effect, full-scale recruitment of Black troops began.

In May 1863, the United States War Department created the Bureau of Colored Troops, and the USCT was officially established. The USCT consisted of 135 regiments of infantry soldiers, six regiments of cavalry, one regiment of light artillery, and 13 regiments of heavy artillery. An additional nineteen thousand African Americans served in the United States Navy. Furthermore, thousands of Black women, who were not allowed to formally enlist, worked for the military as cooks, spies, nurses, and scouts; the most famous of these women was Harriet Tubman.

The United States Colored Troops fought in every major military campaign and battle the Union Army was involved in during the last two years of the Civil War. These included three of the most costly battles of the entire war, the Battle of Nashville, the Battle of Chickamauga, both in Tennessee and the Battle of Spotsylvania Courthouse in Virginia. Throughout the war, the USCT suffered a total of 68,178 casualties while contributing to the Union victory. Moreover, members of the USCT received numerous awards and commendations from the United States Government, including a total of eighteen Congressional Medals of Honor, the highest award a member of the armed forces can receive.

Racial discrimination, which was ever-present, even in the North, infiltrated the army during this time. Almost all of the Black troops were led by white officers, some of whom were not happy with their assignment. For some time, Black soldiers, who were asked to perform no fewer duties than their white compatriots, earned a net pay of $7 a month, while whites earned $13. This was the case from 1863 until mid-1864 when Congress passed a law requiring equal pay to those in the military, regardless of race, along with retroactive payments to those who had been discriminated against. African American prisoners of war were also given much harsher treatment by the Confederacy than white captives.

In the fall of 1865, several months after the Civil War ended, the USCT was disbanded, as were the vast majority of troops who fought in the war. President Lincoln himself was quoted as saying, “Without the military help of the Black freedmen, the war against the South could not have been won.” The legacy of the USCT resides in the U.S. 9th and 10th Cavalry, as well as the 24th and 25th Infantry, regiments of African American troops known as the Buffalo Soldiers who served in the West in the post-Civil War period.