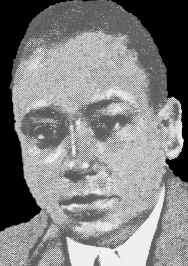 Theophilus Lewis, a drama/theater critic, journalist, and U.S. Postal Service employee, was born to Thomas and Anne Lewis on March 4, 1891, in Baltimore, Maryland. Lewis attended public schools in Baltimore but was very much self-educated. He joined the U.S. Army and fought in World War I from 1917 to 1918 as a part of the American Expeditionary Force. Upon returning to the U.S., he lived in Detroit, Michigan for three years before settling in New York City, New York in 1922. That same year, he began working as a clerk for the U.S. Postal Service, a job he kept until his retirement in 1955. In 1933, Lewis got married and had three children, Selma, Alfred, and Lowell. He converted to Catholicism and was baptized on August 23, 1939.

Most of Lewis’s writing was for The Messenger, the journal created by A. Philip Randolph and Chandler Owens in New York City in 1917. In 1928, Lewis contributed drama reviews to a journal that was being ambitiously established by Wallace Thurman called Harlem: A Forum of Negro Life. There were a number of prominent writers who helped create the magazine but eventually failed. Lewis also wrote for African American newspapers, including The Pittsburgh Courier, where he was the paper’s theater critic and reviewer of books.

Lewis also reviewed books like Richard Wright’s Native Son for the Catholic World in May 1941. He wrote for other Catholic publications, including Interracial Review, America and Commonwealth after his own conversion to Catholicism.

Lewis also dabbled in short fiction. He co-authored a satirical column with George Schuyler that regularly appeared in The Messenger called “Shafts and Darts.” Lewis regularly critiqued films and wrote about the works of black filmmakers such as Oscar Micheaux. In 1950, he helped establish the New York City Commission on Human Rights.

Lewis thought theater was the driving force that could bring social change and cultural development to society. Yet he had a negative view of comedies and musicals, which at the time were the dominant genres of African American theater. He was also critical of directors’ tendencies to cast only light-skinned African American actors. He also contended that talented African American actors were constrained because there were not enough sophisticated and challenging roles for them to play.

Lewis saw small community theaters as essential outlets to increase public interest in theater and the arts since they subjected audiences to important historical subjects and contemporary issues. He also wrote about how African American theater and white theater were forming an informal relationship in which both traditions borrowed ideas from one another.

Theophilus Lewis died in 1974 although the specific date and place are unknown.  He was believed to be eighty-three at the time of his death.